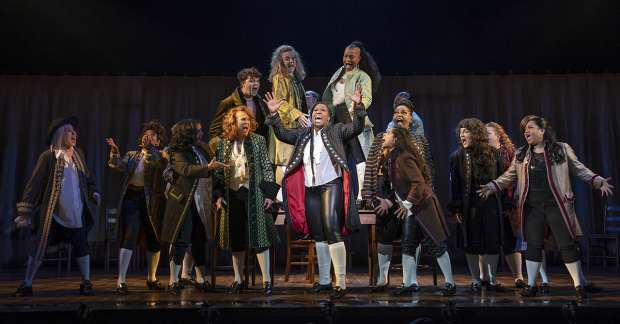 1776, with lyrics and music by Sherman Edwards and a book by Peter Stone, already offered social commentary when it hit Broadway in 1969: the suspenseful tale of the bickering and bartering that went into the singing of the Declaration of Independence was also a parable for the lives being lost overseas in Vietnam at the time. The current Roundabout Theatre Company version doubles — triples? quadruples? — down in Jeffrey L. Page and Diane Paulus’s current revival. Shepherded from Cambridge’s American Repertory Theater to the American Airlines Theater, the show has been recast across gender, ethnic and racial boundaries; a truly diverse slate of performers now play the Founding Fathers. But to what gain? The production amps everything up, including two particularly resonant numbers, “Mama, Look Sharp” and  “Molasses to Rum,” without a cohesive thesis. Sometimes a whisper does more than a scream.