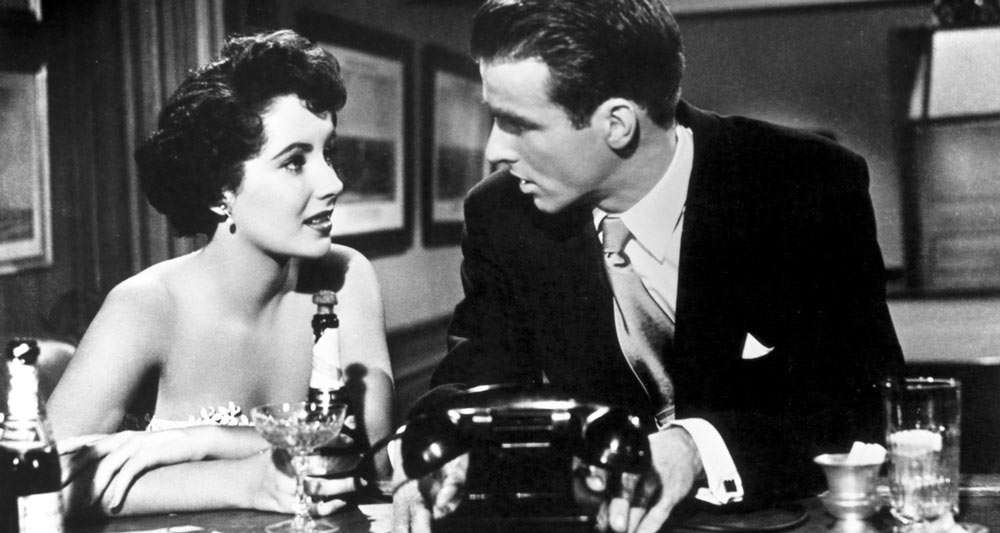 Seventy years ago this weekend, George Stevens’ A Place in the Sun was released. It’s a darkly beautiful look at both the allure and the lie of the American dream, fitting for a work adapted from Theodore Dreiser’s acclaimed An American Tragedy. This story, based on the notorious true murder of Grace Brown, an employee in a skirt factory owned by the uncle of Chester Gillette, who went on trial for the crime, has been told several times over, including as a play and a 1931 Josef von Sternberg’s film adaptation.

The plot’s (adapted by Harry Brown and Michael Wilson) take on the corrosive, deadly effects of social striving might sound familiar, and can easily be compared to The Great Gatsby, which F. Scott Fitzgerald published just a few months prior to Dreiser’s novel. But Stevens takes these raw materials and melds them into something sturdier. It’s a beautiful, Oscar-winning film, but while much of the acclaim generated was for its filmmaking, something that should not be forgotten to time is just how strong – and seminal – its performances are. And it also functions as a neo-noir, which means, there’s even for a movie now entering its eighth decade, something else will play a role: sex. This is a sexy, sexy film.

There’s no way to delve into the film without revealing its plot, so reader beware – spoilers ahead! Montgomery Clift, very much a major actor of his moment, plays George Eastman (no connection to the photography pioneer), a young man hailing from Kansas City and currently working as a Chicago bellhop. His parents are poor, religious zealots, but George desires a larger piece of the pie, and when he encounters his wealthy uncle Charles (Herbert Heyes), who offers George an entry-level job at his factory if he ever makes it to the East Coast.

In short order, George has hitchhiked east and Charles has given him a tedious job stacking boxes of women’s bathing suits off the conveyor belt, where most of the employees are women. Still the outsider, George can look but he cannot touch. Romance with colleagues is against the rules. And yet his libido gets the better of him and George takes up  and taken up with the poor, naïve Alice Tripp (Shelley Winters), a farmer’s daughter.

Like Barbara Stanwyck’s in Baby Face, George seems to have great facility in ascending the corporate world. Uncle Charles promotes George and gives him greater entrée into his world, inviting him to posh parties and enabling him to resemble a true “Eastman.” Though tied to Alice, George tangles with the high-society Angela Vickers (Elizabeth Taylor, as gorgeous as it gets here), perhaps the purest character in the film. While George’s interest in Alice seems merely physical, primal even, a genuine love seems to develop quickly and organically between George and Angela.

But wouldn’t you know it? George has gotten Alice pregnant! And Alice has seen photos of George out on the town with Angela, so she demands he put a ring on it. Drunk on success and love, George reasons that his only solution is to rid himself of this obstacle. He makes plans to take Alice to Loon Lake, his secret getaway locale with Angela, and drown her. But things do not go as planned – sort of. He finds himself unable to murder her, but Alice, sensing something is wrong, causes the boat to turn over, and Alice (and baby) drown after all. George tries to move forward and make a life with Angela, but the law catches up to him. Instead of finding great wealth and fame, he only finds infamy, the subject of a massively sensational trial that ends with him being sentenced to the electric chair. George has become Icarus – his never-ending quest to climb higher has brought him too close to the sun.

I know what you’re thinking: “George sounds like a terrible guy.” If you’re saying that, though, you haven’t seen the film yet. Among Clift’s many considerable gifts was his ability inject dignity and pathos into any character he played, regardless of how flawed they may be. His other-worldly looks certainly helped make even the most selfish of his characters’ actions more tolerable, but a main thread throughout all of his performances is a hidden melancholy suggesting a deep inner life; even if we don’t always know exactly what he’s thinking, we know he’s thinking something, and that it likely comes from a deep reservoir of experience. (Even if you like who won in each respective year, Clift is absolutely Oscar-worthy in all four of his nominated career performances, The Search, From Here to Eternity, Judgement at Nuremberg, and this one. But more about that later.)

Among other things, A Place in the Sun brims with excitement about the possibilities film provides to engage the viewer, and Stevens uses some truly masterly techniques to help skyrocket his stars, fusing real-world hard time with Hollywood factory movie magic Clift had already made a name for himself, as both a promising member of the Actors Studio and in (great) films like Red River and The Heiress. But Stevens announces Clift as something more complicated, even mythical, and he does so straight from the beginning of A Place in the Sun: Instead of title cards for opening credits, the film plays the credits over the image of a man hitch-hiking along the highways. Cars drive right by him, setting up a haves versus the have-nots scenario. This man, who we first only see from behind, will clearly have some sort of obstacles to surmount. As the credits continue, composer Franz Waxman’s music stirs to a fever pitch until we finally get to Steven’s name, and only then do we see Clift full-on, first shot (by cinematographer William C. Mellor) from below, making him God-like, before we start closing in on the handsome star.

What ensues is a two-hour seduction. When George starts working in the factory, he’s essentially al one wolf, the rare man, surrounding by female colleagues, who all gaze upon him with desire. Then once Angela takes a liking to him, Stevens ups the ante by framing their scenes even more intimately, feverishly. Take their iconic kissing scene, which begins with an early meta moment. George, while connected to Alice, tells Angela he loves her, and as she starts to say the same, she turns away, facing the camera with tears in her eyes, saying “Are they looking at us?” It’s part of another one of the film’s themes on class – the dichotomy of who’s doing the watching (the have-nots) and who’s being watched (the haves). With Alice, George is the former, and with Angela, he’s the latter. It’s a notion that Stevens carries through to the end of his film, when George is, of course, looked at for the ugliest of reasons, his hunger for more having led George to foul his nest.

Back to the kissing scene. Angela has moved to a patio out of view, and as she and George kiss, with Mellor’s circling around them to simulate their growing arousal, finally focusing on Angela’s eyes over the back of George’s shoulder. (Another repeated motif is viewing characters whose back is to the camera, even during crucial dramatic moments, suggesting incomplete omniscience. Sometimes we cannot get into our characters’ heads completely.)

Like more traditional noir films, A Place in the Sun unfolds because of George’s love blinds him to the difference between right and wrong. And in Angela’s eyes – really, Taylor’s violet eyes, which come off exquisitely, even in black-and-white) – we literally see what George sees in her. She’s a cinematic Helen of Troy. (And also quite worthy of a Supporting Actress nomination that year.)

By now, Taylor was already a gifted child actress, had been married in the previous year’s Father of the Bride and would become a mother later in the 1951 sequel, Father’s Little Dividend. But just like this film elevated Clift to a higher level of intensity, it also introduces Taylor as the romantic lead she’d quickly go on to be. Her relationship with Clift has palpable chemistry (in real life, she remained a steadfast close friend until he died), and while it’s portrayed with relative chaste, the sex oozes out from underneath. (Also, let’s not shortchange praise for Winters, who plays the opposite side of a dog-eat-dog world, the ultimate kind of have-not, with the right amount of vulnerability, self-doubt, lust, and optimism.)

Oddly, A Place in the Sun can be seen as both a big winner at awards time and an Oscar underdog at the same time. The movie won the Golden Globe for Best Motion Picture – Drama, and won six Oscars out of nine nominations, for Best Screenplay, Mellor’s black-and-white cinematography, Best Film Editing, Best Black-and-White Costume Design, Best Dramatic Score, and for Stevens as Best Director. Somewhat uniquely, both of Stevens’ wins are for films that lost the Best Picture Oscar – 1956’s Giant being the other (similar fates befell Alfonso Cuarón and Ang Lee, and three of John Ford’s record-breaking four wins were for films that did not claim the year’s top prize.)

But the film ended up not being the big story at that year’s Oscars. In addition to losing Best Picture (to a beautiful, less cynical An American in Paris), the film’s other nominations were Winters for Lead Actress (so sure she had it in the bag, Winters claims to have stood up in advance her name being read – it wasn’t; Vivien Leigh collected her second statuette for A Streetcar Named Desire), and Clift for Lead Actor. Humphrey Bogart took home the prize for The African Queen. Sadly, Clift’s worthiness here has been overshadowed by fellow Method pioneer Marlon Brando, who many often cite as the rightful winner for his seminal Stanley Kowalski in A Streetcar Named Desire.

No shade to Bogart or Brando, but Clift gets my vote here. His performance is unmistakably human, with the actor unafraid to dip into George’s darkest and most exploitative traits. But he also locates all of George’s vulnerability. Stevens weds Mellor’s camerawork perfectly with Clift’s silent skills. Witness the way George uncomfortably interacts with the East Coast muckety mucks, the way Clift demonstrates the acrobatic anguish of having to contort himself to fit in in a series of claustrophobic shots, the way he feels confined with Alice. He can only breathe easy with Angela, which is where we get a lot of two-shots of the pair on even footing. Like Jay Gatsby, like Don Draper, we can objectively be horrified by what George stands for, but subjectively, we can also see ourselves falling for it.

A Place in the Sun asks a fundamental question. How can one get more than they’ve been given? Should one? The story is a cautionary tale, but the film is a genuine treasure that should not be forgotten.