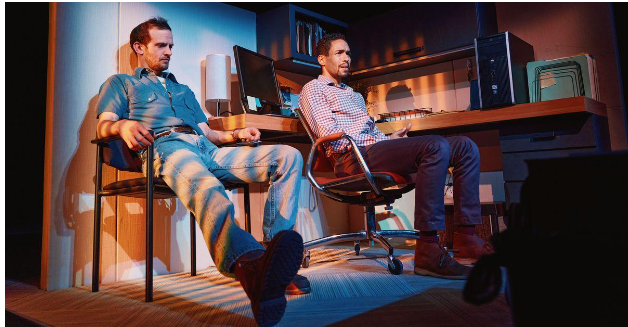 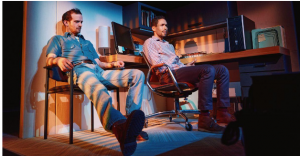 A Case for the Existence of God is must-see theatre

A Case for the Existence of God opens as two characters – a mortgage broker and a potential client – meet to find a way to secure enough money so that he can purchase a home that has special meaning for him. Since the show notes only describe this meeting as its plot, and since the only two characters listed are already onstage, it’s fair to assume the entire play will occur during this one exchange.

Eventually, though, the action shifts, as indicated by subtle shifts in lighting, sound, and the actors’ performances. It takes a while to realize it, but you realize the two men have been meeting frequently, and socially, over a period of time. They have developed a kinship with each other. These two men, near strangers as the lights came up, now root for each other. At first gradually, and then suddenly, you realize that you, too, are rooting for both of them.

Existence, receiving its world premiere at the Signature Theatre, is the latest work from Samuel D. Hunter, whose plays focus on the ordinary lives and struggles of residents from his home state of Idaho (including A Bright New Boise, The Greater Clements, and The Whale). But it is about far more than procedural matters, economic or otherwise.

Both Keith, the mortgage broker (Kyle Beltran) and Ryan, the prospective homeowner (Will Brill), have been born and raised in Twin Falls. Ryan, the product of a turbulent home, is dealing with the end of his marriage and facing a contentious custody arrangement for his young daughter – he is hoping that in retrieving a house surrendered by an ancestor of his that he might find security in his life. Keith, the son of a lawyer, comes from stabler means, but also has paternal concerns. After a failed attempt at surrogacy, he has been a surrogate father to a young girl the same age as Ryan’s (the two men met at their daughters’ daycare facility) but has discovered an obstacle to adopting her: a relative of the girl’s birth mother has emerged with interest in raising the girl herself. That he is single, gay, and black makes his position even more precarious.

Both men are looking to stabilize themselves, to find solid footing in a shifting world that seems just fine passing them by. Despite different backgrounds and upbringings, both have recently woken up to the fact that playing by the rules won’t help them realize their dreams. The system seems stacked against them. If knowing is half the battle, then what are they to do soldier on?

Their losses prove to be a dramatic gain, and the show is a perfect match for the unique talents of director David Cromer, an actor who has also helmed such works as the Our Town revival at Barrow Street Theatre and The Band’s Visit. He’s able to tell patient, sensitive stories with ease. At one point, Keith and Ryan acknowledge that, in their thirties, the two men share a certain kind of sadness. That kind of honesty is rare. It’s a key scene, one that openly acknowledges just how hard life can be in the face of the type of unglamorously mundane problems not typically dramatized.

Hunter also leans into an area not typically given theatrical weight: platonic mid-life male friendship. Traditionally, male friendships are long-established prior to the start of any dramatic action. They exist either to be a sounding board for another character or for the friendship to be tested at a crisis point; perhaps there is even a betrayal ahead. If two men do meet within the action of a dramatic work, there is a lingering question of whether this new relationship will eventually become more romantic or sexual. No such question of that exists here, though Hunter knows just how to subtly up the dramatic stakes in Existence. This foundling friendship will be tested., especially once Keith realizes that they share a childhood overlap and Ryan makes increasingly desperate financial decisions.

For a show so focused on male friendship, Existence is blessed to be cast with Beltran and Brill, two of New York’s finest stage actors, and, serendipitously, undergraduate roommates and real-life friends. Their palpable chemistry fuels the entire show and makes the delicate moments feel even more lived-in. Brill digs into Ryan’s self-destructive tendencies (his family has a history of addiction and volatility), and the actor physically embodies the character’s constant fear loop of failing those he loves. In contrast to Ryan’s past-based concerns, Keith is anxious about what may lurk ahead for him. In one particularly clever scene, Keith, a student of early music, explains polyphony to Ryan, who ends up drunkenly dozing right through it. The character might miss out on the gorgeous sound of two intertwined male voices, but the two performers are nonetheless creating a perfectly harmonious dramatic blend.

Technically, the production of Existence is every bit as superlative as the play and its performances are, though I question Signature’s decision to stage it in the expansive Irene Diamond Stage, where ample negative space can threaten to dwarf the action occurring in within set designer Arnulfo Maldonado’s malleable corporate cubicle set. Brenda Abbandandolo’s costumes and Christopher Darbassie’s sound design are both evocative, while Tyler Micoleau lighting design works as a constant salve as Keith and Ryan attempt to confront their issues.

Existence never actually comes out and questions its titular phrase. But in presenting two men working to assert their value and in achieving such a state of grace, the play just might answer it.

A Case for the Existence of God

Signature Center and runs through May 15

Tags: A Case for the Existence of God, Off Broadway, Reviews, Signature Center

A Raisin in the Sun