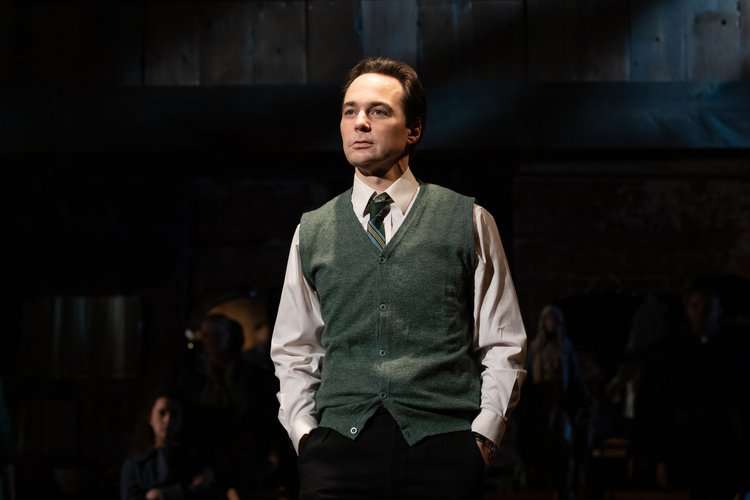 Call New York a big city all you want (and I typically do), but sometimes it feels like a real small town – especially when a cluster of your favorite people all gather together in a hallowed space. That’s the feeling one comes away with upon seeing the newly revived musical adaptation of A Man of No Importance at Classic Stage Company, where several of the great character actors of the New York stage have convened to bring new heat to this oft-overlooked chestnut.

A Man of No Importance hasn’t been revived since its well-received 2002 premiere at Lincoln Center, and this production has two factors that make it feel essential: it’s the swan song for director John Doyle, CSC’s departing artistic director, following a monumental (if sometimes polarizing) reign; and it marks the New York musical theatre debut for Emmy-winning The Big Bang Theory star Jim Parsons, through whose eyes we follow a course of desire, disillusion, and discovery.

Parsons plays Alfie Byrne, a Dublin bus conductor currently trying to stage an amateur production of Oscar Wilde’s Salome with the amateur group of local commuters who ride with him on a daily basis. He fills his days staging short-lived productions with the community of St. Imelda’s Players, and spends his evenings with his sister, Lily (Mare Winningham). Both unmarried, the two live together, but much goes unsaid. She doesn’t tell Alfie that she’s delaying the advances of local butcher Mr. Carney (Thom Sesma) because she feels duty-bound to wait until he has found a woman with whom he will settle down. And Alfie has never told Lily that the reason he has not, and likely will not, take a wife is because he is gay. (The year is 1964.)

In a town where little happens and even less ever changes, the arrival of Adele Rice (Shereen Ahmed) raises plenty of eyebrows. Lily hopes she might be the one for Alfie, while he focuses on convincing her to play the title role in his latest production. He, personally, has focused his gaze on the friendly younger bus driver Robbie (A.J. Shively), who does not reciprocate and has his eyes elsewhere.

The plot of No Importance, originally a 1994 film written by Barry Devlin, always felt a little safe, a little outdated for its time: when will Alfie ultimately be outed, and what will happen once he is? (The movie, starring Albert Finney and Oscar-winner Brenda Fricker as Alfie and Lily, did not cause much of a stir upon its release.) But the musical version generated new excitement, reuniting librettist Terrence McNally with lyricist Lynn Ahrens and composer Stephen Flaherty, the triumphant triumvirate behind Ragtime, and the collaboration added new color and depth to what was otherwise a more prudish Peyton Place of a plot.

And it’s when these songs are wed to the skills of the superlative supporting cast that No Importance bounds to brilliant life. William Youmans’ delivery of “The Cuddles Mary Gave,” as widower Baldy O’Shea, is a dissertation on mournful reflection and how a musical number can open up an entire world of character development beyond plot. Similarly, Sesma and Winningham treat an amusing number like “Books” into commentary on class and culture – only for Winningham to later show a fuller measure of Lily’s depth with a searing delivery of “Tell Me Why.” (Sesma, excellent throughout, also plays an additional role – Oscar Wilde himself, a sort of spiritual mentor to Alfie.)

Another major asset is Shively, bringing the same charisma he parlayed to Tony-nominated effect last spring in Paradise Square. He’s better matched by his co-stars and material here, but it’s his own charisma and natural gifts as a dancer that make “The Streets of Dublin” a Celtic wonder. Other stage stalwarts like Alma Cuervo, Mary Beth Peil, and Nathaniel Stampley also complement the material – and prove to find even matches in newer talent like Ahmed as well as Da’Von T. Moody.

If there is anything that holds this revival back, it’s probably the two elements that served as this productions raison d’etre. Many familiar with Doyle’s work are aware of his stylistic tendencies, which include having his performers play musical instruments onstage and a less-is-more approach that requires the audience to imagine locations that aren’t created through physical sets (Doyle also serves as the show’s set designer). This means our ensemble repeatedly walks back and forth and around the same thrust stage space as it transitions from church to pub to bus and several other settings. The lack of intentionality through this pantomime act can get confusing, and even distracting.

The other issue is Parsons himself, who is not a trained singer and not an Irishman. Neither was Roger Rees, who originated the musical role of Alfie onstage, and so the role doesn’t require too much of its performer. Still, he does occasionally stumble with his accent and vocals. However, don’t be too quick to write off some of his line readings as sounding too much like his television alter ego – there is indeed an inherent overlap between Alfie’s repression and Sheldon Cooper’s social awkwardness, and Parsons navigates Alfie’s frustration with real pathos. At a pivotal moment toward the end of the show, Alfie finds himself moved by an unexpected act of kindness. When Parsons gets a tear in his eye, we all do.

A Man of No Importance
Classic Stage Company
https://www.classicstage.org/current-season/a-man-of-no-importance

The Bedwetter offers a peek at the young Sarah Silverman