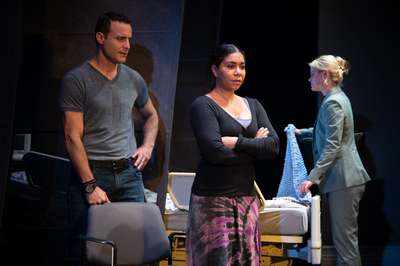 Can an emotional affair be just as damaging as a physical one?

Fate has not been kind to the Queens couple we meet in Grant MacDermott’s Jasper, a Yonder Window Theatre Company world premiere production currently playing at the Pershing Square Signature Center. In the production, directed by Katie McHugh, Drew (Dominic Fumusa) and Andrea (Jessica Pimentel) have spent most of their adult lives caring for their young son, the play’s namesake, who suffers from a chronic, catastrophic (unspecified here) illness that requires constant care and that causes great worry.

Their lives reduced to a state of perpetual alarm, the two parents have been stripped of a life of their own as both a couple and as individuals: Andrea cooks, cleans, and fights for Jasper to enter a restrictive experimental treatment program; Drew works construction by day to come home and share the worry by night. (There are references to a past alcohol dependency issue that remain nebulous as well.) They have lost sight of each other’s needs, and their only measure of time is between medical incidents that would elevate the heartrate of any parent.

Beleaguered as he is, Drew at least finds one way of coming up for air. On a subway commute to work, he meets Shayla (Abigail Hawk), a type-A advertising executive and single mother to a four-year-old named Tyler. (Like Jasper, Tyler, too is pantomimed – we see neither child, and only occasionally hear them make sounds, thanks to a dexterous sound design from John Gromada). Drew affably lends Shalya his hoodie to cover a coffee stain, and a second meeting to retrieve the item of clothing leads to a series of theoretically chaste arranged meetings in a playground.

This is, pretty clearly, an emotional affair, but it is an atypical one. The driving factor here isn’t sex or even infatuation. Drew gets to experience an uncomplicated role-play as father figure to Tyler – they can play catch and he never has to worry about the young child’s health becoming hazardous. And Shayla allows Drew to fill the void vacated by her deadbeat ex-husband, recreating a complete family structure she’s all too quick to adhere to. The arrangement is all fulfillment, no baggage.

MacDermott’s play calls to mind several similar-minded works, including Peter Nichols’ A Day in the Death of Joe Egg, Amy Herzog’s Mary Jane, Bernard Slade’s Same Time, Next Year, and Jeff Talbott’s The Gravedigger’s Lullaby. But in his diagrammatic approach to storytelling, MacDermott never quite hits the sophisticated heights of those forebears. His first-act setup creates several potential paths for our characters, and instead of committing Jasper to one of them, he follows all of his threads to clear conclusions, even if they are not necessarily convincing – or earned – ones. The play is mostly focused on Drew’s pain, and on his finding closure and absolution for his mistakes, rather than equitably show how grace might look for all three of the play’s adults who have been dealt a difficult hand.

If Jasper dips into formula, the show’s three excellent performers do well to prop it back up into something more engrossing. Fumusa easily channels Drew’s inner torment and confusion, and isn’t afraid to show that despite good intentions, his character is neither smart nor heroic. Pimentel is Mother Courage incarnate, completely defined by her son’s lot in life – she makes us understand the push-pull she has with Drew, even as she suspects something might be different for him when he steps outside of the apartment. (Also, are their names really Andrea and Andrew?!) Hawks is also quite fine, making for a believably harried single mother who is so in her own head she cannot even see how good she has it.

MacDermott also has a keen eye for detail (leading one to wonder if the show’s overall premise stems from a grueling personal place), especially when it comes to portraying class – Drew’s loyalty to the Mets and Jasper’s pediatrician having a Greek last name are strokes that make total sense. And the way we see Andrea constantly doing laundry while Shayla makes an offhand reference to having someone else do her dry-cleaning speaks volumes, as do Michael Gianfrancesco’s accurate costuming and claustrophobic set design.

Other plotting matters require a bit of head-scratching. Isn’t Drew missing a ton of construction shifts when spending time with Shayla and Tyler? Is his job, and therefore his family’s livelihood, in jeopardy? That, paired with the early reference to his erstwhile drinking problem, are Chekhov’s guns that never do pull a trigger.

What MacDermott strives for might actually be better suited as a television film – his melodrama lends itself more to tight closeups. It behooves Jasper that McHugh’s production is staged at the Alice Griffin Jewel Box Theatre at the Pershing Square Center, a space small enough to allow for the intimacy this piece demands.

Getting Piggy With It: “The Butcher Boy” is guilty of not digging deeper