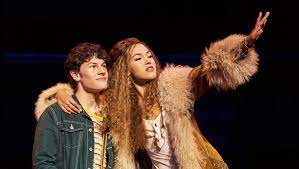 The new Almost Famous musical will not rock you

Familiarity breeds contempt in two-fold manner throughout Almost Famous, the musical adaptation of the Cameron Crowe’s Oscar-winning 2000 film that just opened at the Bernard B Jacobs Theatre. The movie, a textured, somewhat fictionalized autobiography celebrating the very public start of Crowe’s very public career as a music journalist, got so much right – the way music can make you come alive, the way people bond over their cultural loves, the way it feels to belong to a group of likeminded people. The musical adaptation, with a book by Crowe himself and stagnant direction from the formidable Jeremy Herrin, barely even does the work. Watching Almost Famous onstage, it’s hard to believe that anyone involved in this show has ever even been a fan of music in their lives.

Those familiar with the movie will remember the show’s plot. In 1973, William Miller (Casey Likes), an impressionable teenage outcast from San Diego with a passion for music, lands himself a dream assignment: hit the road with the ascending rock band Stillwater for a piece in Rolling Stone magazine. William finds it perilously easy to be drawn in by the band, fronted by lead singer Jeff Bebe (Drew Gehling) but dominated by charismatic guitarist Russell Hammond (Chris Wood), and by the groupies who travel with them – “Band-Aids” – led by Penny Lane (Solea Pfeiffer). As a result, he’s blinded to both the shifting politics within the band and the sexual politics happening all around him.

As a movie, Almost Famous tapped into viewers’ nostalgia for the music and moments that helped make them who they are. As a musical, Almost Famous taps into audiences’ memories of the movie. Crowe lacks the understanding of what engines drive proper theatrical storytelling and he hews far too close to his source material, which in this case isn’t just the movie, but the experiences in his own life that inspired it. Penny Lane and Russell are designed by David Zinn to emulate their forebears from the film, Kate Hudson and Billy Crudup (although Gehling’s Bebe is now little more than a neutered punchline in an ill-fitting wig). Small character bits that add onscreen flavor just glut the stage version. And almost every famous line of dialogue from the film gets carried over here, including “Don’t take drugs!,” “I am a golden God!,” and “It’s all happening,” but they now feel obligatory instead of organic. And just about every plot beat repurposed from the film lacks the visceral punch it packs onscreen, including the famous “Tiny Dancer” bus scene.

Crowe would have done better to part with some of the elements that worked in his movie and relieve the show from feeling overplotted. One suggestion is to completely drop the character of William’s mother, played smartly and tartly by Frances McDormand in the film and thanklessly by Anika Larsen onstage – it doesn’t add up that this no-nonsense woman would tolerate her teen son to continue traveling with debaucherous musicians across the country days before his high school graduation, and the sense of time and place, of growing distance and gnawing estrangement doesn’t come across onstage the way it can on film. A tighter focus might have come from beefing up the pressure put on William by his Rolling Stone editors (Matthew C. Yee plays Rolling Stone’s Ben Fong-Torres). Worry that he might not only miss a deadline, but might miss out on a dream career just as it seems to be taking off could put some guardrails on the material and create real stakes.

Herrin’s by-the-numbers directorial approach does little to draw the audience to either geographical time or emotional headspace. Set designer Derek McLane’s rock-arena scaffolding video projections offer a vague sense of where William and the gang are over time, but overall lack specific orientation. (When Russell decides to jump from a rooftop into a pool, it’s only clear what he is doing to those who have seen the film). Natasha Katz’s arena-rock lighting design feels rote as well.

A show about music and the people who love it should demonstrate a similar passion for the music it creates. Composer Tom Kitt’s generic melodies get sliced and diced, delivered in fragments that are interrupted by dialogue instead of being sung-through in full. And a large proportion of the show’s music are also diegetic covers of period hits from groups like the Allman Brothers Band, Deep Purple, and Led Zeppelin. Some of the musical’s most important emotional numbers rely on existing songs in the pop canon, including David Bowie’s “Ain’t It Easy” and Joni Mitchell’s “River.” (When we do arrive at the “Tiny Dancer” moment, which closes the first act, it feels more like a campfire singalong than clarion call.)

The score points to other flaws with the show as a whole. Penny Lane’s “Morocco” should be a major “I Want” song, but it just sort of lies there. The character of William, ostensibly the show’s lead, only has one true solo, “No Friends” – has Crowe’s artistic myopia prevented him from seeing the full stage picture? So in love does he appear to be with each of his characters that he never makes it clear whose true journey is the central one in this show. And in trying to smooth out characters to dial back what we would now refer to as “problematic” behavior – Stillwater bandmates treat their sexual conquests as chattel – Crowe has deflated them. And Herrin doesn’t push any of his performers – while Wood suggests an interesting interior life for Russell, Gehling, Likes, and Pfeiffer aren’t able to conjure up much being Crowe’s two-dimensional character outlining. Almost Famous can’t work if it wants to play it safe. It has to hurt.

One character gets it – real-life rock critic Lester Bangs (played to perfection her by Rob Colletti). Part real, part ethereal, he functions as a tough-love Jiminy Cricket who interacts with William throughout the show to warn him about the ethical tightrope between liking music and liking musicians. These moments pop, just as they did onscreen, the only difference being that the film had other great swaths of emotion and authenticity throughout, so there was a sense of balance, the thorns set just beneath the rose. An unbloomed flower, the only thing to cling onto in the musical version of Almost Famous is the thorn.