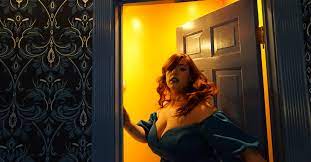 Easily one of the great voices on the New York musical stage, Alysha Umphress still remains a bit of an open secret. Why doesn’t everyone know who she is and immediately call for her to be cast in everything?! (If you were lucky to catch her in the 2014-15 On the Town revival, you know she was snubbed of a Tony nomination.)

Umphress put all of her skills and her dazzling personality on display at Joe’s Pub in And Things…Like This, a biographical cabaret that captures the spirit of the season. With the help of melodies arranged by Jeff Blumenkrantz, Joel Wagner and Joshua Stephen Kartes, Umphress regaled her audience with stories of her early introduction to music by her father and the beginning of her career as a spunky child performer with a side ponytail and the advice of her mother (both parents were in attendance at the show I saw).

Video montages edited by Jake Wilson fused home footage of a young Umphress with some of her rabid pop culture interests, including American Idol contestants, Real Housewives, Wendy William, and Margaret “God Warrior” Perrin. (There’s also a recurring visit to Liza Minnelli.) Those provided lowbrow humor, a nice compliment to Umphress’ highbrow musical interpretation of such songs as “Angie Baby,” “Brandy, You’re a Fine Girl,” and “Sunday Kind of Love.” Fellow friend and Tony-nominated Broadway performer Cristin Milioti joined her for a lovely duet of “Taken to the Sky,” one of several numbers that dipped into the theme of witches and witchcraft. The slowed down, jazzy medleys really let you really find a new way into the songs she performed and their heartrending lyrics.

And I haven’t even mentioned the costume changes! Umphress sports four different goddess dresses throughout the performance. The vocals are worth the price of admission alone, but it sure was a bonus to see, as the late Aretha Franklin would say, the “great gowns, beautiful gowns.”

Aretha sure would be proud.