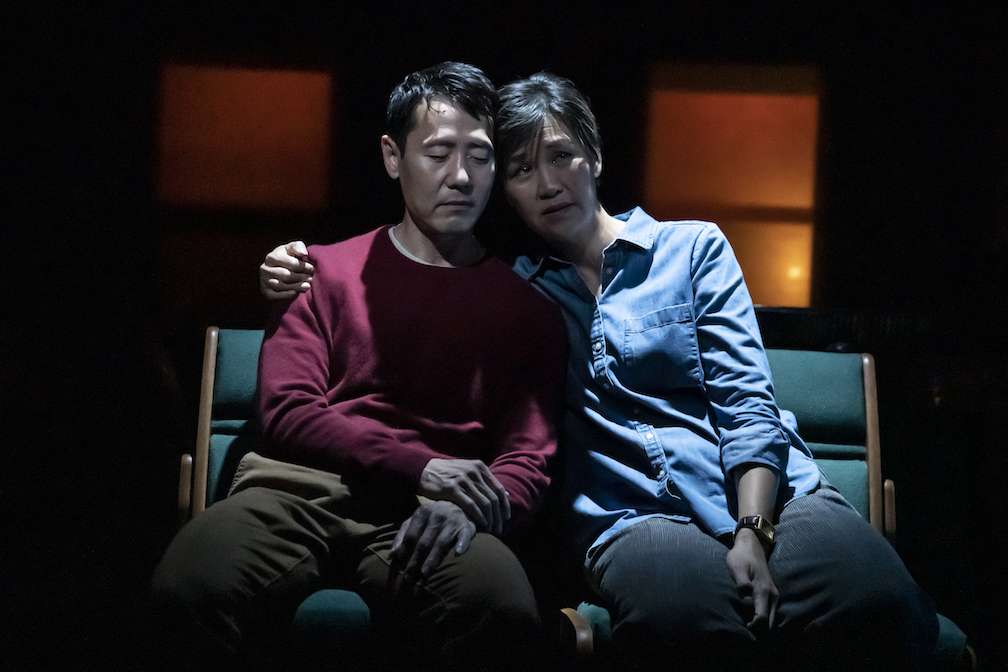 The return of Catch As Catch Can is must-see theatre

Second chances are almost as rare in the theatre as they are in life. Yes, prominent shows (particularly musicals) enjoy revivals, but many smaller, often downtown, shows with limited runs tend to hit it and quit it. Even if they enjoy a warm reception, if you missed it in the moment, you missed it forever. You truly had to be there.

So great news is in store for those who didn’t have the time or know about Mia Chung’s Catch As Catch Can, which had a brief run with Page 73 four years ago at the New Ohio Theatre. Playwrights Horizons has remounted Chung’s play, and while the play remains fundamentally the same, some of the faces are new (including director Daniel Aukin), and it has fundamentally changed the game. The actors have been recast in ways that add new meaning and greater resonance to this nimble and insightful work.

Catch is a three-hander in which three performers – here, Cindy Cheung, Jon Norman Schneider, and Rob Yang – portray six members of two working-class New England families. Each plays a character corresponding to their own age and gender as well as that character’s own parent, at which point they are playing someone a generation older and of the opposite gender. While the characters are all white, Chung has specified that they “be performed by an all-white cast or a cast that is all of East Asian descent.” In casting three Asian actors, Aukin and Chung refocus the show’s lens on both identity and race. It becomes a play about how we define ourselves against others, and about how we “other.”

We first meet widowed Theresa Phelan (Yang) and Roberta LaVecchia (Schneider) kibbitzing over matters small (the British royal family) and big (their children’s affairs). Theresa reveals that her son Tim (also Yang) is returning home after eleven years in California, having recently been engaged to someone named Minjung. Roberta’s son, Robbie (also Schneider), was also once married to a Korean woman, though that union has ended. Tim is also close with Ronnie’s sister, Danielle (Cheung), whose unconventional life choices lead others to judge her, except for her father, Lon (also Cheung), who sees value in her roundabout path.

The play eases us in; at first, the actors interact as either one set of characters or another. But then the two generations share the space, volleying back and forth between older and younger. More than most shows, the burden falls on our three actors to bring the specifics of the scripted page to life. Aukin’s dexterous direction allows us to very quickly access when which characters are being portrayed, even when the actors toggle back and forth and back again from parent to child or vice versa – Catch offers some of the most adroit transitions we’ve seen since Venus In Fur. (Matt Saunders’ set also nimbly transforms from kitchen and living room to hospital locals at the same pace.) Yes, at first the show feels like a parlor game of sorts to watch the action pinball between these three actors doubling across two generations. And much of Chung’s dialogue is hysterical, particularly when the show lingers over a pivotal Christmas gathering attended by all. Roberta, upon realizing she’s neglected part of her menu – “Oh my god, the shells!” – is one of the most convincing Italian deliveries I’ve ever heard. (The accent work runs deep and strong, but is never overwrought).

Chung knows the way that emotional weather can turn on a dime. Characters in the show get lost in their own reverie, interrupting conversational threads with their own tangents. Catch transitions from humorous moments to serious ones; you don’t even realize you’re in the middle of something important until you’re already in the middle of it – much like life. Almost every single line up dialogue is freighted with meaning and import. Around the time of the Christmas gathering, the frays in the parent-child relationship begin to show. They commune, but fail to communicate.  And the microaggressions we’ve borne witness to since the play’s beginning climb to a macro level. We learn that much more is plaguing Tim than we first realized; in a virtuosic moment, Yang plays both son, emotionally sinking into himself, and mother, passive-aggressively eviscerating him in a way only a parent can, especially one who cannot understand their child. And Yang, sliding from Theresa’s barbed delivery to Tim’s verbally flatlined rhythms, is mesmerizing. (Marika Kent’s striking lighting design also helps punctuate the proceedings.)

Catch emerges as a show about the patterns and traits that can only emerge over time and that we can only recognize after we have trained ourselves to recognize them. Chung demonstrates how much is inherited by one generation from the one that preceded it. Robbie insists his failed marriage was a byproduct of his parents’ treatment of both him and his wife. Tim’s mental illness might be genetic. Dani’s personal choices, we learn, might be a direct rebuttal of what she has seen growing up. So much of who we are, the play reminds us, is determined for us because it is given to us.

But audience members have been handed a gift with this remounted production. More than a recycled revival, Catch as Catch Can brims with new life and insight. This masterpiece is one of the best shows of the year.

Catch As Catch Can

Under the Dragon’s Tail: A Review

Everything Everywhere All at Once