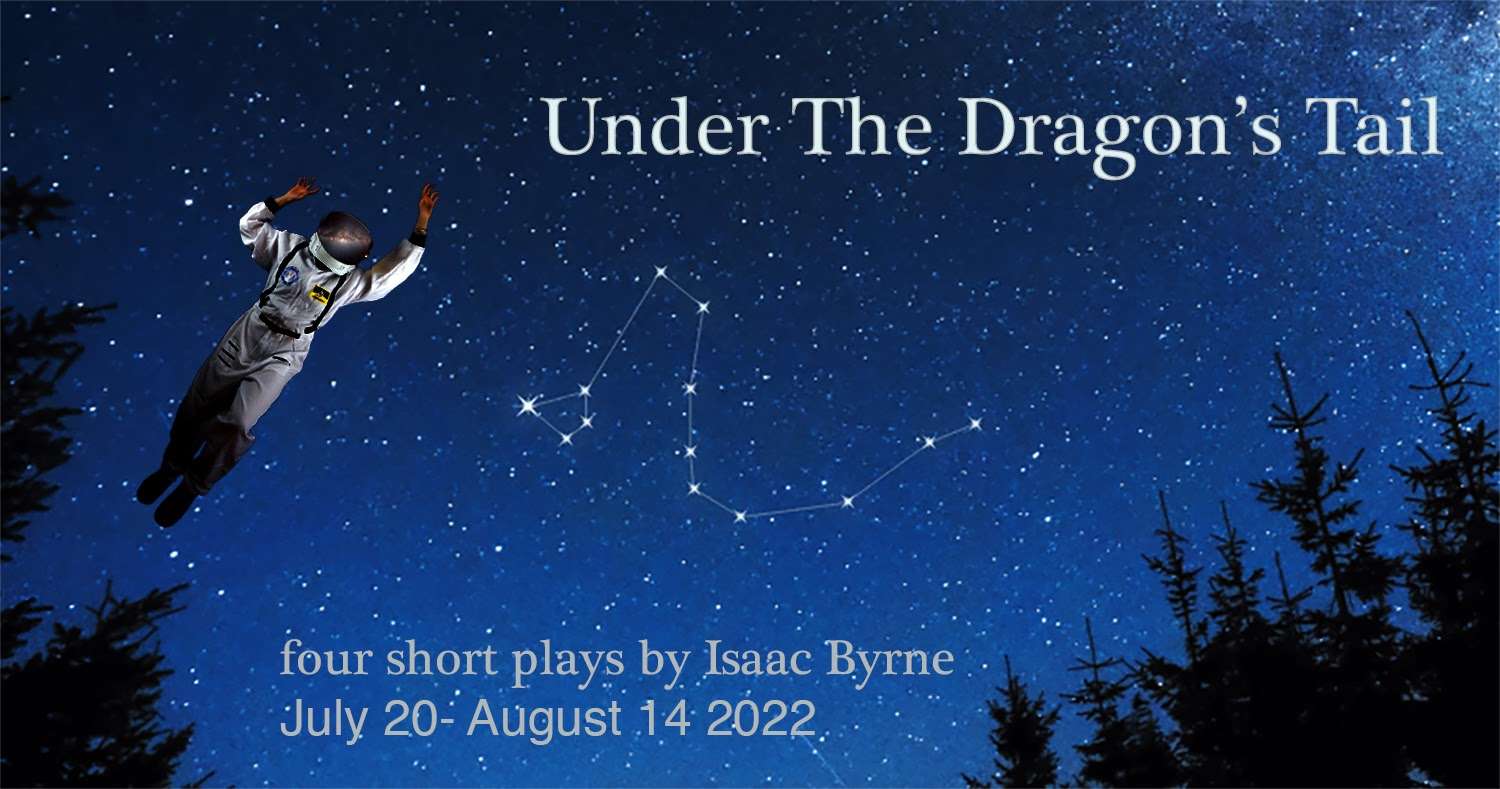 Theatre 4the People and Matthew Corozine Studio Theater will present the world premiere of Under the Dragon’s Tail: 4 Short Plays, written and directed by Isaac Byrne, for a limited run from Wednesday, July 20 through Sunday, August 14. The collection, in which “snakes, myths, space, and self-help gurus collide,” marks the New York playwriting debut of Byrne, an independent theatre stalwart whose career productions include Sara Fellini’s In Vestments, Sylvia Milo’s The Other Mozart, Desiree Burch’s Tar Baby, and Bekah Brunstetter’s To Nineveh.

Garden State Journal caught up with Byrne to talk about how he has weathered the last few years, what Theatre4thePeople is all about, and the dangers of rattlesnakes.

Garden State Journal: You’ve long been a get-your-hands-dirty, nitty-gritty creative force, but you’re primarily known as a director and teacher. Was there a switch where you thought, “I want to write?”

Isaac Byrne: Kind of. 2019 was such an insane and intense year I had to start writing to stay alive. I got divorced, my mother died, I somehow finished grad school and then I was broke. I was sleeping on an air mattress and driving Uber all night. I was starting over in every way at 41 years old. I just had so much emotional chaos going internally that I think I just had to find a yet another artistic outlet or…I was going to explode. And then 2020 happened, and I just kept writing. Writing is really beautiful and wonderful, but it’s also terrifyingly intimate. But it really did feel like I had to start writing and keep writing or die.

GSJ: How does it feel to now carry the label of “playwright?”

IB: Crazy. It feels crazy. When I sit down and write, it’s exhilarating. Freeing. I love the creative freedom of it. But once actors start memorizing the words you wrote? And then they start saying them in a theater? It feels like someone’s shouting your diary over a loudspeaker. It feels strange and tender to be this “new” at something in theater. But also, it feels right. There are moments where being in rehearsal feels like an out-of-body experience. I’ve had to lean on my dramaturg, Erika Phoebus, at times, when parts of these plays are so personal that I have trouble seeing them clearly. Thank God for her clear-eyed brilliance, because there have been moments where I have struggled to see the forest for the trees.

GSJ: How come you chose to write four plays, as opposed to starting out with one?

IB: Well, the first play I wrote was actually a full-length about my mother’s illegal lesbian wedding in Texas circa 2011. I wrote most of that play in the hospital next to her while she was in a coma. I’m still rewriting and reworking that one for a production in the next couple of years – stay tuned.

These short plays started out as a break from working on that play, and I got really caught up in working on them. There’s something really lovely about working on four short stories and then also finding the connections between them. Each of these plays feels like a strange funhouse mirror of my mind on display.

GSJ: Where did the ideas for these plays come from?

IB: Ophiology was inspired by this one crazy moment—involving a rattlesnake and a cop— that happened to a close friend in the middle of a terrible tragedy. It was ancillary to the true events of that night, but I couldn’t get this weird moment out of my head. Sometimes people act in ways that are so terrifying and also so easily misunderstood in crisis situations. Also, I started learning HORRIFYING trivia about rattlesnakes on the internet.

The Golden Fleece is another weird obsession of mine. Ten years ago I was researching Medea and I learned all about Jason and the Argonauts. I got a little obsessed with the original story, which is very different from the play by Euripides. It’s such a tragic love story. It’s also a story about how a good person can be so twisted up and broken down by betrayal. And it’s also the story of a veteran being betrayed and abandoned by his country. Perhaps most importantly, it’s about the stories we choose to remember and why.

Letters to a Young Cosmonaut was inspired directly by Abigail Thorn’s “Philosophy Tube” videos on trauma, suicide and mental Health. If you haven’t watched her videos, they are incredible. They’re like watching visual poems on philosophy. She’s so open about her own life and personal journey. It inspired me to really drill down into some of my own dark corners. Honestly, I completely stole the metaphor she used in one of her videos and just expanded on it with my own weird humor. She knows about it. I sent her the play. She was very sweet and gracious about it. I guess it’s condoned and all that. No pending lawsuits.

One.Two.Three. started as a sort of poetic monologue that I wrote after going through my divorce. I was trying to reconcile how to deal with what it meant to end a thirteen-year relationship. Who are you now? Half of who you were for over a decade is gone now. How do you move forward? Where do you find answers to all the impossible questions erupting out of all that?

GSJ: Theatre4thePeople has been around now for more than decade, is that right? How did it first come to be, how has it morphed over the last few years?

IB: It started in 2010. It’s evolved and changed a bit, through different forms. But the core principles are still the same: support new artists and make sure what we do is economically accessible to audiences. We’re still committed to those ideas. We have two pay-what-you-can performances for this run (July 20 and July 27), and we’re really revving up our support of new artists.

After the LARK, the Humana Festival, the Sundance Theatre Lab, and so many other play development places disappeared, we really shifted our primary focus. In late 2021, we started an initiative called @theBarn. We got a starter grant from the Indie Theater Fund. We give an artist a week in a beautiful Hudson Valley barn on a 200-year-old farm and a stipend – every month. The barn normally rents for over $2,000 a week on Air BnB. The artists can work on whatever they want to work on: no deliverables, no application or artist statements. We just give them a bucolic space to work, recharge, and create. We’ve had some incredible artists out already. We just had Lavender Public come out in June to work on their queer retelling of Peter Pan and Captain Hook, Pete and James. That musical is going to be an absolute hit. Right now we have Jackie Roth, a deaf actor/writer, out here, working on a solo show.

Next year we are looking to partner with theatre companies to nominate artists for the residency. It’s been amazing success so far. It’s necessary. We can’t let the loss of so many theaters stifle the next generation of artists.

GSJ: How do these four plays speak to Theatre4thePeople’s mission?

IB: Well, it felt a little disingenuous at first to make such a big shift towards supporting all these theatre artists and then…produce plays that I wrote myself. But my new co-artistic director, Joshua Rose, talked me into it. We are in talks to produce several other playwrights next season, and he felt strongly that my own work should also be supported. Perhaps more practically, he felt that our first production together as co-artistic directors would be easier if we did something small and very “in-house” before working with these other playwrights.

It’s easy to leave yourself out of the equation when you start a company with a mission like ours, but I think (hope) it’s more honest to include yourself. We all need support and a platform for our work. I’m no different from any other playwright in that regard.

GSJ: What do you hope people take away from this evening?

IB: I hope that people leave feeling happy and seen. These plays are wild, strange, and incredibly personal. But everyone working on them has said, “This part feels so close to me” or “This is exactly how I would say this” or “This feels so close to who I am that it’s scary.” It’s been amazing to see how other people can connect so deeply to something so specifically personal to me.

I think that’s all we want really. To be seen and understood. To know that even in this strange and frequently absurd life, we’re not alone. Someone out there is going through a different but very similar version of the same thing you’re living through. There’s a comfort in that. We’re all connected.