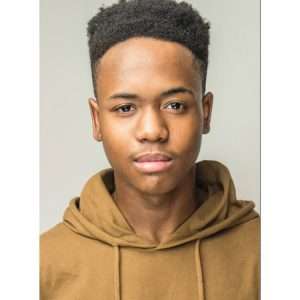 “The past steps on the heel of the present” is an observation first made by Patricia MacLachlan in Sarah, Plain and Tall. As recent weeks have proven, it is indeed impossible to shake away the ghosts of yesterday; they continue to haunt today.

The new movie The Subject, written by Chisa Hutchison and directed by Lanie Zipoy, also examines the way events of the past carry forward, as a successful white documentary filmmaker (played by Jason Biggs) deals with the fallout from his last film, which caught the murder of a black teenager on tape. In the present day, someone seems to be recording – and threatening – his own life.

The Subject also stars Anabelle Acosta, Nile Bullock, Caleb Eberhardt, Aunjanue Ellis and Carra Patterson. Garden State Journal caught up with Bullock, a prodigiously talented actor/dancer/singer whose credits include Chicago Med, Law and Order and Orange Is The New Black, about his involvement in the film.

Garden State Journal: Though it hits on universal themes, The Subject also touches some very specific notes in terms of culture and location. What did working on the film mean to you?

Nile Bullock: Working on this film made me feel like I have a responsibility to tell this story. It’s been one of the most meaningful projects I’ve ever worked on so far. It really makes me want to be a mentor for the youth, especially those from communities that don’t have much. That’s what Malcolm, the character I play, needed. Working on The Subject made me take away a sense of mentorship as well as respect for my craft as a young black actor.

GSJ: How did you get involved with the film?
NB: I got the call through my management to come in and audition. I auditioned twice for the role, and I knew I really wanted the role once I read the full script.

GSJ: Does The Subject carry any personal resonance for you?
NB: Absolutely. After reading the script, I instantly felt that connection between me and Malcolm. I saw parts of myself and my friends in Malcolm, which made playing the role help me realize how important this story really is.

GSJ: What did you enjoy most about working on this movie?
NB: Everything. This cast and crew were amazing, and everybody gave 100%. The energy on the set was beautiful! Working with Jason Biggs felt like breathing, to be honest. It felt so natural to go back and forth with him. An amazing experience. Also being able to tape in Harlem made it feel like home to me.

GSJ: What do you hope audiences take away from the film?
NB: I want them to walk away with a different perspective on the topic in this film. Hopefully they walk away with a change of heart, or a sense of new information. That the film stays with them.

GSJ: How have you been – and how have you been taking care of yourself – during these last few challenging months?
NB: I’ve been pushing forward. I’ve been trying to keep myself busy doing new activities every other day or envisioning new ways to speak out against the current events we’ve been seeing today. I even attended my first protest in Teaneck, New Jersey, a few days ago.

I’ve also been really trying to speak through my content – exerting a lot of inspiration from current events through my media, my work, my dance, and my music. Particularly on instagram (@nb.talented).

GSJ: What are you working on next?
NB: It’s a secret. Stay tuned.

Nile Bullock can also be seen on Twitter as: @bullocknile.