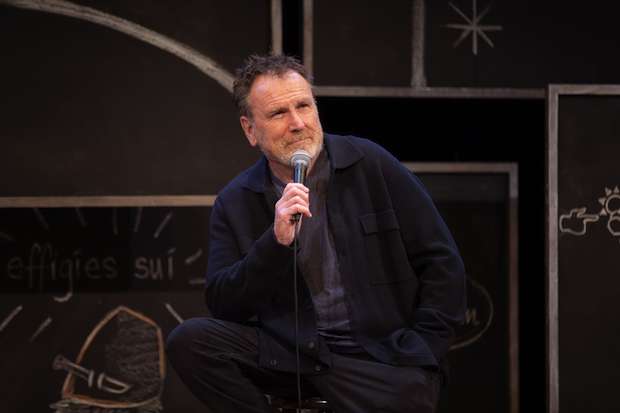 Comedian Colin Quinn has a bone to pick with the way we live these days in his new show, Small Talk, which just opened at the Lucile Lortel Theatre.

Quinn’s perspective is that small talk isn’t small stuff – it isn’t how we kill time or display social graces. It’s fundamental to how we live, and how society has arrived at its current, clumsy moment. According to the philosophy he employs in zigzag fashion throughout the show, it’s the intersection of our politicized polarization and our slavish obeisance of social media branding that has deprived us of any ability to co-exist in the moment.

Small Talk follows the standard template familiar to those who have seen Quinn’s other recent socio-observant shows like Long Story Short, The New York Story, Red State Blue State, and Unconstitutional. He fuses his own personal anecdotes with cultural and historical events to support his thesis that America’s charm is that it is built on ground that is as hollow as it is hallowed; our ability to schmooze and take in the moment is the bedrock of who we are. And in our shared pursuit of saying the “right” thing and aiming to self-promote in doing so, we’re no longer thinking and speaking for ourselves.

Quinn uses his signature Brooklyn dialect – more bark than bite – to namecheck the ways we now police ourselves, including the way that human resources now plays an enhanced role in governing real and perceived microaggressions: “There are two very important and separate groups in every office,” he says, “the sexist pigs and those who are assigned to stop them. These are their stories.” (“You’ll see five years from now there will be no more Law & Order, no more CSI; every cop show is going to be HR.”)

On text etiquette: “If somebody sends you a text and says ‘I love you’ without three hearts, you’re like ‘This person doesn’t love me.’” He also opines that if our country ended tomorrow, our legacy might not be much more than a  Myrtle Beach T-shirt slogan: “America: If you can’t handle me at my worst, you don’t deserve me at my best.” (He also shoehorns in mention of the heart attack he suffered a half-decade ago and reminisces about late, great comedian Norm Macdonald, who he views as a master of small talk, and one who had a wicked penchant of remembering how to sue those conversations to his benefit later on.)

The observations are keen, and I applaud Quinn’s willingness to go against the grain; he’s an equal opportunity offender against those whose sensibilities are both woke and are comatose. But the material, with its  incomplete sentences and disorganized thoughts (tangents beget more tangents), still feels raw and unfocused; it’s not a pristine work of theatre as much as a glorified standup routine, and Small Talk bears the unpolished status of a routine still in development rather than a work of theatre in final form. Perhaps the invisible hand of director James Fauvell needed to remain a bit more visible.

Some of the material remains inconsistent. Quinn has a valid point that the younger generations are too obsessed with their online personas, but can’t quite arrive at what a desirable personality should be or how it should be taught. Then he follows that up by saying that he’s no reliable instructor himself: “I got news for you, your authentic self is not your best self,” he states. Of course, he doesn’t outright write off youth culture: “I’m an old man dressed like a 12-year-old boy.”

There is also an unclear relationship between Quinn’s material and designer Zoë Hurwitz’s set design, an installation of interconnected chalkboards with lessons in various languages and arrows drawn across them. Quinn is a lively performer. But as engaged as he is in Small Talk, he still can’t quite connect. Perhaps his own lesson is one he still has yet to master.

Scandal in the Wind