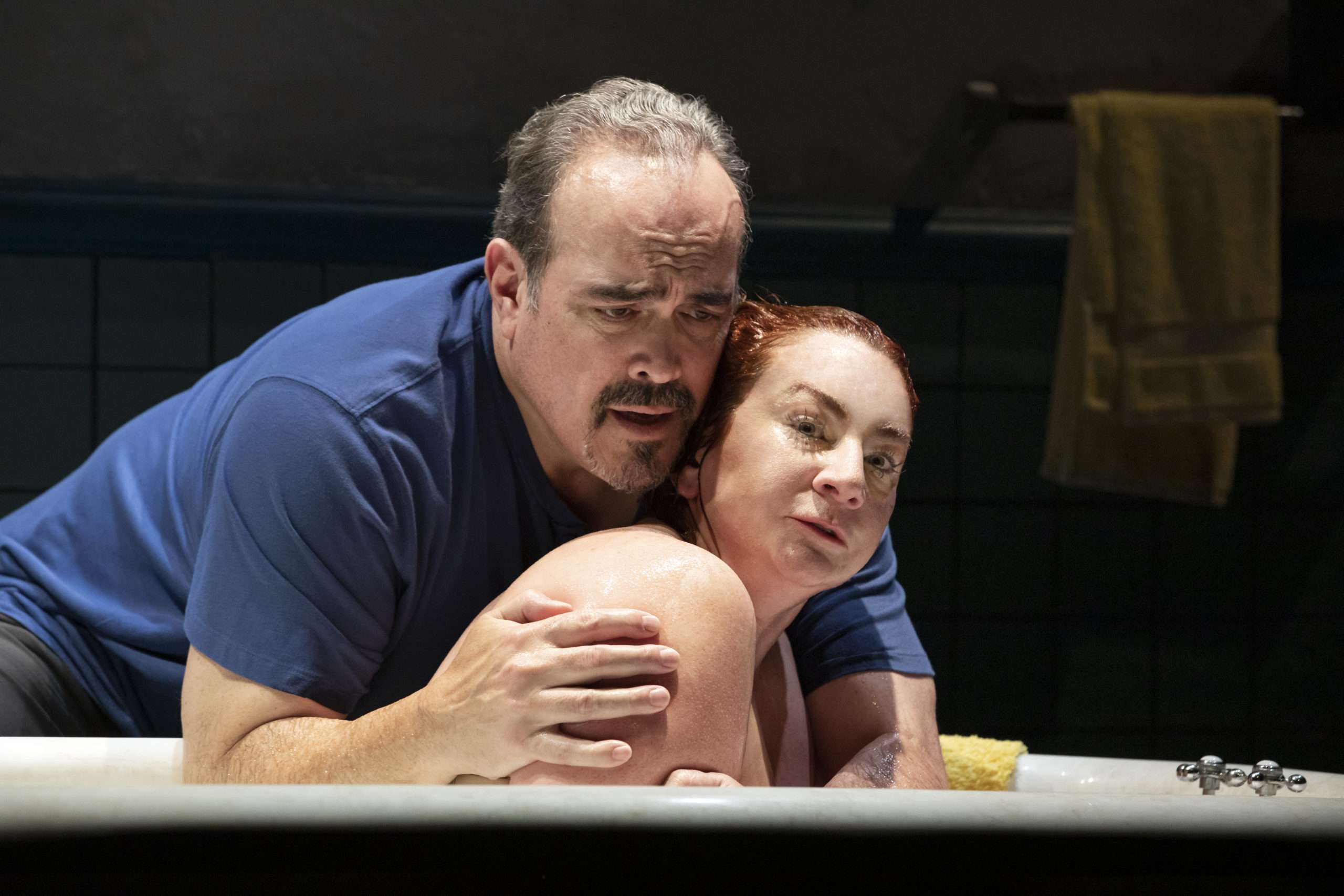 A Pulitzer Prize-winner following its Off-Broadway run five years ago, Cost of Living, Martyna Majok’s paean to the disenfranchised, is enjoying a brief run at Manhattan Theater Club’s Samuel J. Friedman Theatre. This allows audiences a second chance to see what her abilities are at crafting dramatically sharp portrayals of the human condition – and her limitations therein.

Cost of Living tracks two largely distinct stories about couples negotiating their way around each other. Eddie (David Zayas) and Ani (Katy Sullivan a bilateral above-the-knee amputee) are an estranged married couple who come together anew after an accident leaves her a quadriplegic. Even though Eddie, a Nuyorican truck driver who has already moved on with another woman, volunteers to be Ani’s caretaker – partly to assuage his own guilt, and partly to fill a very real need (Ani cannot afford healthcare).

John has cerebral palsy (as does his portrayer, Gregg Mozgala), but also enjoys a rarer kind of privileged status as a wealthy Princeton Ph. D. student (and Harvard alum – we know this as Majok has his character instructionally remind us he moved from “Cambridge”), which tips the scales in an unequal direction against his newly hired caregiver, Jess (Kara Young), who is also an Ivy League graduate but is not well off and must contend with a series of deflating blue-collar gigs.

The structure here is overly schematic – disadvantage hits people differently, and those with more money have more options. Nothing new there. And Majok’s use of flashback and confusing chronology feels amateurish. The power play between Jess and John – in different ways, both depend on each other – bears little dramatic fruit, and even fewer surprises. (What’s interesting is that Cost of Living derived from a shorter play Majok wrote specifically about the John character – what could that work have been?)

The Ani-Eddie story is thinner from a content standpoint – in fact, one thinks it exists largely for an emotionally manipulative jaw-dropper of a moment – but it’s emotionally sturdier, and in Zayas’ marvelous portrait of Eddie, the only time we see that Majok’s greater strengths lie in dialogue, not construction. Lines like “Roads are dark and America’s long” meld poetry and realism all at once, and his recollection about his parents being unable to afford a desired Christmas present is heartrending.

Director Jo Bonney moves the show apace, but when we finally arrive at play’s ham-fisted end, any of the play’s attempts at grace come to a halt. Cost of Living’s attempts are admirable, but it is also a manipulative show with a labored, dramatically unsatisfying sensibility.