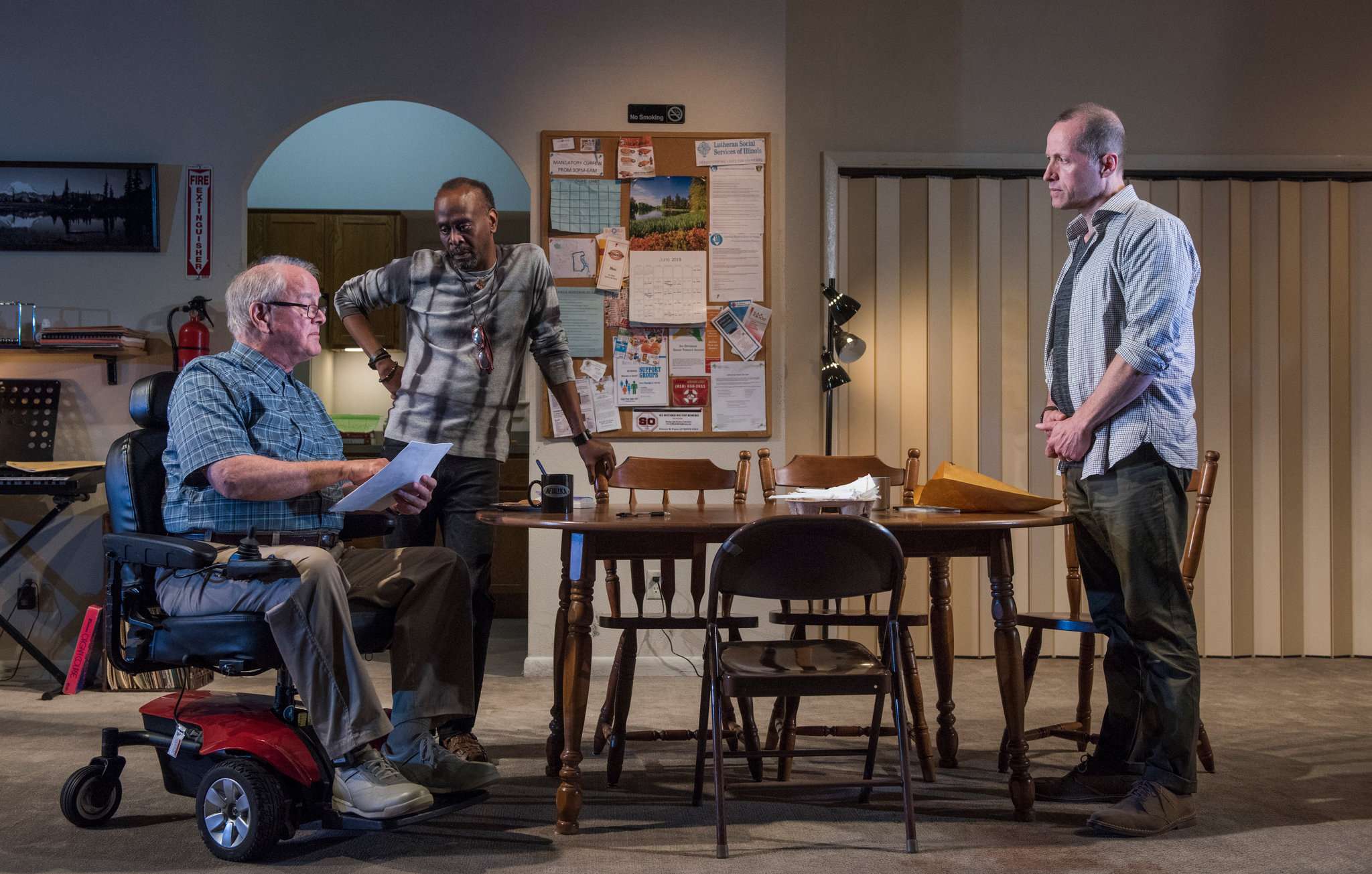 Downstate is so good it hurts

Yes, audience members stay seated throughout Downstate, Bruce Norris’ latest play, which transfers to his frequent New York home base of Playwrights Horizons after an acclaimed run at Chicago’s Steppenwolf Theater Company in a production helmed by Pam Mackinnon. But so thought-provoking is the show that one might find themselves frequently running from one side to the other of the issues Norris raises in the play. Between Downstate and Catch as Catch Can, Playwrights Horizons offers the best one-two punch to be found in live theatre.

Norris’ career is marked by such plays as Clybourne Park (his Pulitzer winner), Domesticated, The Pain and the Itch, and The Qualms, shows that question the value of social structures and whose characters either justify or question how they live – and puncture them with continuous sense of brutal wit. Downstate, which takes place in a church-run group home for convicted sex offenders to live in upon release, eyes some hard truths. The four residents include Dee (K. Todd Freeman), a musical theatre performer who loves pop culture and fiery comebacks; Felix (Eddie Torres), a taciturn Latino immigrant; Fred (Francis Guinan), a retired piano teacher confined to a wheelchair; and Gio (Glenn Davis, co-artistic director of Steppenwolf), the youngest and most outgoing of the quartet.

There: these introductions make them sound kind and relatable. What I’ve left out, and what Norris fills in before too long, is that as a teacher, Fred molested at least two of his young male students. And that Dee had a long relationship with an underage boy. Gio brushes off his conviction, saying he was merely confused about his partner’s age, and frequently pushes the limits of the rules with which they must contend. And Felix molested his daughter.

Does that alter the way you view these men? And should it, if they have served their time for past transgressions. It’s clear that Norris cares about the four housemates – Downstate is far from “Sex Offenders, Unite!” He shows that their post-release lives are limited in terms of opportunity to reacclimate to the world or to change, and that the outside world often shows no signs of making their transitions possible, let alone easy. They mention death threats, and the boarded up front window of their home (Todd Rosenthal’s set design and Adam Silverman’s lighting evoke a believably downtrodden interior) bears the evidence of the many rocks and eggs thrown their way.

And if it wasn’t hard enough for these strangers with disparate personalities and urges to cohabitate, Norris then metaphorically tightens the walls around them: their tough-talking probation officer, Ivy (a fantastic Susanna Guzman), equal parts seasoned and cynical, her toughness creating blind spots, arrives with the news that their neighbors have expanded the safety-zone perimeter surrounding a nearby school, further limiting their freedom. They can’t even shop at their preferred grocery store any longer. Not to mention their difficulty in finding post-prison employment. Dee says, cuttingly, that “the job market is somewhat limited for the elderly black homosexual ex-convict.”

But Downstate works like a lazy Susan, and whenever our loyalties seem to lie with the housemates, Mackinnon and Norris feed us new information that makes us doubt or retract our allegiance. These men have ways to justify their actions and dispute society’s rejection of them. Gio insists that he is the victim of unjust laws – but the way we see him flout the rules hints that he maybe he knows few boundaries, legal or otherwise. Dee maintains that his affair with a fourteen-year-old when he was thirty-seven was consensual. Incarceration hasn’t necessarily reformed this money, only branded them with a scarlet” M.”

On the day in question, Fred is visited by Andy (Tim Hopper) and his wife Em (Sally Murphy). Andy was one of his Fred’s child victims, and while he is a functional adult with career in finance and a family, he has returned to clumsily confront Fred for his past sins, asking him to read aloud and sign a “reconciliation contract” that will bring him some closure. But Fred will only admit to some, not all, of these accusations. Does it matter if matter if neither party correctly remembers what the misbehavior included when there was indeed misbehavior afoot?

McKinnon’s hand is so dexterous that she lets her audience know exactly when they should hold their breath and when they should exhale. And Norris knows how to puncture the intensity of Downstate just so; he balances out the gravity of the subject matter at hand with extraordinary humor – with just a few tweaks the show could be a sitcom or an opera. And while the entire ensemble shines with this delicate material, it’s Freeman who elevates Dee’s victim-villain diatribe into a nearly act-long aria. “I don’t mean to quibble,” he says while trying to disarm Andy, “but wouldn’t a survivor be like if ya survived a plane crash?” But just when one wants to give Dee credit for his allegiance to Fred, we’re reminded that Dee gets money as the disabled man’s caretaker. Everyone is fighting for something, and virtually nothing said is to be taken at face value – not Andy, not Dee, not Fred, not Felix, not Gino.

But not everyone’s lies are equally damning. Despite a few stumbles – an overly telegraphed plot point, an unclear read on the complicated and damaged character of Andy – Norris’ tragicomic is a stark look at the consequence of choice. Neither overly poetic nor a polemic, he asks head-on what forgiveness requires. And if these men are deserving of a second chance, is it even possible in a world in which the system seems guaranteed to deny them one?

That the answer is not provided within the world of the play is perhaps its greatest strength.