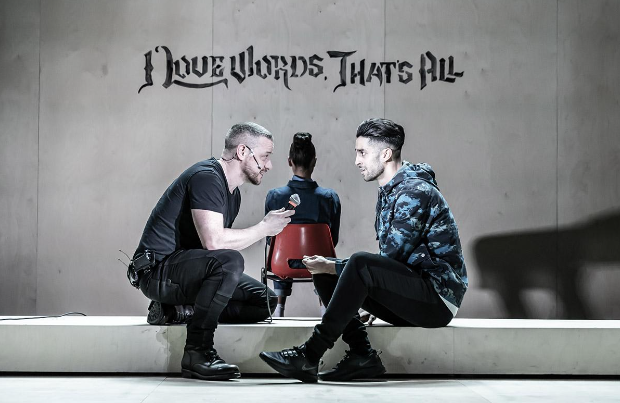 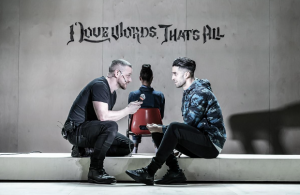 It was exciting to learn that James McAvoy, the mightily talented Scottish film and television star, would be returning to the stage (pre-pandemic). It was odd to then learn that he would be playing the title role in a new revival of Edmund Rostand’s Cyrano de Bergerac. McAvoy is not only incredibly handsome and confident, already an odd physical fit for the role, but in this production, he doesn’t even wear a fake nose. No protuberance? What gives?

In this production, newly transferred from the West End to the Brooklyn Academy of Music, plenty. Director Jamie Lloyd has helmed Cyrano before, including a Roundabout Theatre Company production starring an excellent Douglas Hodge a decade earlier, but for Lloyd, the second verse must be different from the first. And so Lloyd has conscripted playwright Martin Crimp to fashion a spoken-word adaptation that is more faithful than literal, but nonetheless prêt-à-porter. This now semi-contemporized, diverse show is clearly still set in 1640, but it also speaks to right now.

Make that raps to right now. Gone are Rostand’s 12-syllable alexandrines, having been replaced with more spoken-word cadences. And the cast is then invited to the mic. First, we meet Ligniere (Nima Taleghani), a young poet who serves as de facto emcee of this adaptation: “The Parisian isn’t superior / just everyone else is inferior,” he raps. This is all done for the benefit of Christian (Eben Figueiredo), a small-town soldier who has just enlisted as a cadet. Christian immediately falls in love with the more cerebral Roxane (Evelyn Miller), who has already been claimed by her own admirer, the Count de Guiche (Tom Edden)?

Christian turns to Cyrano, Roxane’s cousin and the leader of Christian’s regiment. As always, Cyrano is described by others in relation to his proboscis: “The enormity /of his nose is a deformity / . . . They say when he came through his mother’s vagina / the nose poked out first as a painful reminder / of all the agony to come.”

Similarly: “When you first see it you say to yourself NO! ―/ that is a party-trick ― take it off, Cyrano,” says Madame Ragueneau (Michele Austin), as she describes the magnitude of his large nose. “You expect him to reach up and somehow unscrew it./ But the damage is done: he can never undo it.”

But he’s no longer defined by it: Clad in tight T-shirt, puffer jacket and biker boots, he’s more bluster than I’ve heretofore seen in a Cyrano, as he engages in a rap-battle with Valvert (Nari Blair-Mangat). Making his New York stage debut, McAvoy (who has previously worked with Lloyd in Macbeth, The Ruling Class, and Three Days of Rain) is an alpha through and through. The arc of the show itself remains the same. Roxane still falls in love with Christian, who turns to Cyrano to provide the words with which he can woo her. And Cyrano is still in love with Roxane from afar. “I burn myself alive for you, I worship you, I strip you, I clothe you, I do up the tiniest buttons at your sleeve.… all I can say is I want ― I want ― I want ―” Crimp’s Cyrano states. (Jon Clark’s lighting design and the sound design by Ben and Max Ringham amplify his stark state of affairs.)

I’m not sure we need all of this pantomime, but in turning the title character from clandestine bard to street poet, Lloyd and company have imbued the play with a newfound energy I’ve never before connected to it. “I’m well aware I don’t stand much of a chance/Here in the literary world of 17th century France/Money – cronyism – fear of giving offense/Poets on juries awarding cash-prizes to their friends./As for our 17th century theatre – well – don’t you agree/It’s become just fly-paper for mediocrity?/Sure, you can set the bar quite high/But still the writers stick on it and die.” The marriage of Crimp’s new verse and McAvoy’s tormented brooding create an electricity not associated with the classical version. Passion, not passivity, rule the day for this new Cyrano. McAvoy’s every gesture and intonation hint at the rage simmering beneath the surface and fueling the wordsmithing he so easily conjures. (Words are the central leitmotif of the show; even set designer Soutra Gilmour has “I love words, that’s all” painted on the minimally set stage’s backdrop.)

Miller, similarly, plays a more realized Roxane than we have had in recent memory, with very modern overtures to the gender dynamics of her time. “I am so, so bored with not being taken seriously by men,” she says. “I marry Valvert, Valvert leases me back to de Guiche. Job-share for them –sex-slavery for me.” (Of course, these words could echo in any era.) Her reaction to learning of Christian and Cyrano’s long con is similarly seen in a more contemporary way. Ultimately, I found myself falling for all of Lloyd’s updates to the show – until the end draws near, and several choices (a passionate same-sex kiss, the decision to shift Roxane’s fate away from a convent) felt like we had finally veered too far from Rostand’s blueprint. Maybe that’s the point: A show with characters so overrun by desire proving that eventually, one tires from restraint.