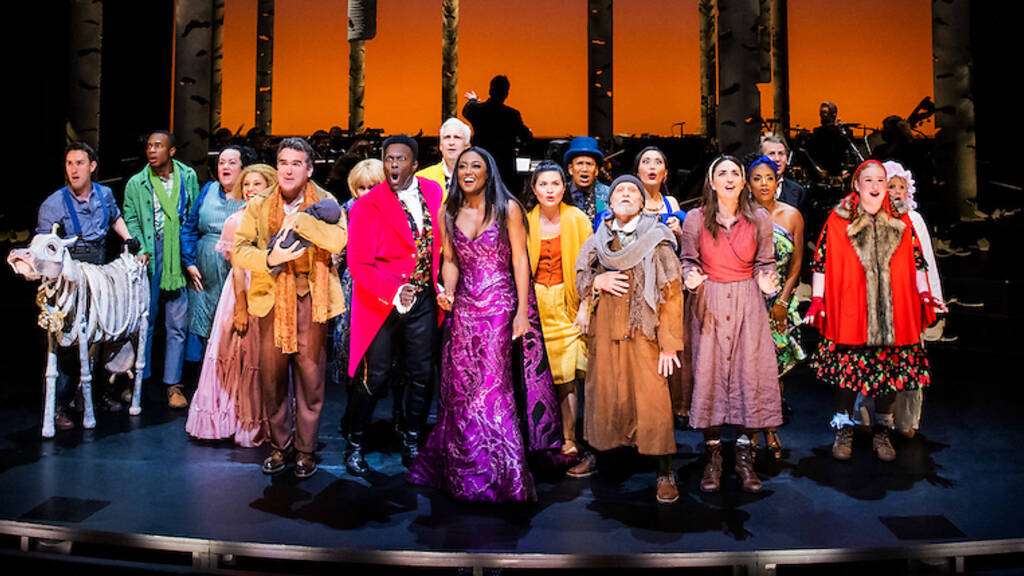 Revisited but not revitalized, Into the Woods, the fabled James Lapine-Stephen Sondheim musical, has been revived for a second time on Broadway, having immediately transferred over from a two-week New York City Center Encores! production directed by Lear deBessonet. But good luck if you want to catch see something new with – or even just see – favorites like the Baker, Cinderella, Jack or Little Red. Concocted for a Broadway transfer but still designed for a smaller stage, with an onstage orchestra occupying most of the space, audience members might be hard pressed to see many of the characters, whose portrayers have no choice to perform in a tight amount of downstage space and are often directed to fall, sit, lean, and lay on the floor. No matter: this company relies on the audience knowing the show so well and loving it so much that they don’t necessarily need to see what’s happening in font of them. It’s a revival that’s so eager to please, it misses the forest for the trees.

Yes, Woods maintains plenty of the bright spots that earned this theatrical fusion of fairytales a fervent following 35 years ago, including a score that includes such gems as “Agony,” “It Takes Two,” “No More,” that, in the hands of music director Rob Berman (working from Jonathan Tunick’s original music direction), features orchestrations that are bar none. But this production displays an overarching lack of humility and discovery – it’s big on color, broad on laughs, but overall light on depth.

As most know, Woods uses familiar figures with familial issues to show how fortitude helps you make your wishes come true, and then what do after it does. We meet the put-upon Cinderella (Phillipa Soo), who must deal with a wicked stepmother (Nancy Opel) and stepsisters Lucinda (Ta’Nika Gibson) and Florinda (Brooke Ishibashi) and try to win Prince Charming (Gavin Creel, hammy), but do so on her terms. Prince Charming’s brother (Joshua Henry), also a prince but one who seems to have no other name of his own, longs for Rapunzel (Alysia Velez), who in turn must contend with a witch of a mother (Patina Miller). Jack (understudy Alex Joseph Grayson at the performance I attended, filling in for Cole Thompson) of the famed beanstalk learns to barter for his cow, Milky White (designed by James Ortiz and puppeteered by Kennedy Kanagawa, who does his own onstage mugging while manipulating his little bovine), as his mother (Aymee Garcia) worries for the poor boy, with good reason.

Additionally, a childless baker and his wife (Sara Bareilles and Jason Forbach, filling in for Brian D’arcy James, who was felled by COVID in late previews and had to miss opening night) meet a young girl, Little Red Ridinghood (Julia Lester, so arch she’s practically a rainbow), sojourning to the house her grandmother (Annie Golden). She’ll encounter a dangerous wolf along the way, also played by Creel. And he’s not the only one doing double duty in the show; Golden will also appear as a merciless wife of a giant, and the wonderful David Patrick Kelly both narrates these entwined tales and also portrays a mysterious man who may have a connection to the Baker.

There’s a Faustian bargain to be made in the woods, which alternately represent the unknown, an escape, danger, excitement, discovery. Play but there might be a comeuppance. And these various journeys ultimately guide our heroes to their happy endings – until they don’t. (Lapine and the late Sondheim wouldn’t make it that easy, right?) Which is life, and which is the point of the show.

But there’s a different kind of energy, an arrogance, permeating deBessonet’s production. The cast of characters are dealing with a lack of control. That sense of powerlessness and fear of the unknown is what initially caused people to create the very fairy tales from which this show lovingly pulls, parables of conflict solved and villains bested (it’s also why swaths of people have turned to religion, but The Book of Mormon has claimed that one). The overall sense in this revival is of being “too cool” to give oneself over to that true sense of fear or impotence. One doesn’t get the sense these characters have lost one night’s sleep over their lot in life – only that they’ve gone to the gym and had lots of doors open for them.

For the many for whom theatre runs in their veins – both practitioners and fans of the stage – Into the Woods is somewhere between an entitlement and a rite of passage. They’ve watched the recording of the original Broadway production, they’ve heard the cast recordings, they’ve done the show. And so maybe there’s nothing left to discover for those involved with this revival. There’s plenty of call-and-response, but there’s no spontaneity. It feels more like a fun night at cabaret than a night of sharply-observed theatre.

What results is a show too coy to possess the correct emotional appreciation. Bareilles is solid, but many of her intonations are so contemporary they veer on cockiness; Lester’s Little Red is too worldly-wise and snarky upon first meeting her for “I Know Things Know” to bear any fruit; Jack’s coming-of-age number “Giants in the Sky” goes too low by inserting an erection joke, making the subtle suddenly gratuitous. Towards the end, “No More” should devastate the audience, allowing “No One Is Alone” to provide the catharsis. These songs, though well-sung, just lay there now; they can’t hit you viscerally if the way every note is hit is eagerly anticipated. And Miller’s you-got-served energy (in addition to bad diction) feels rather un-storybook-like. (Furthermore, her impressive vibrato seems like an ill fit for Sondheim’s score; it would be more appropriate on a ‘90s Anita Baker album.)

And with the emotional landscape left unmined, one begins digging in the analytical side of the sandbox. For the first time while watching, I began questioning the book: Why, after years, does the Witch suddenly approach the Baker and Baker’s Wife? Why do the limits of the witch’s powers feel so arbitrary (she can raise a cow from the dead but not touch hair as gold as corn?!)? Why does Rapunzel’s prince get shorter shrift than Cinderella’s? Why, specifically, does the Baker possess such doubts when it comes to fatherhood?

I’m not completely made of stone – there are some real wins here! Certainly Phillipa Soo’s lovely vocals and mordant humor make for a fresh Cinderella (fun fact: Soo replaces Denee Benton from the Encores! staging; Benton had previously taken on the role Soo had originated off-Broadway when Natasha, Pierre and the Great Comet of 1812 moved to Broadway). And Garcia, Grayson, and Henry are also in fine form. Forbach is particularly effective, finding shades of self-recrimination and melancholy for the Baker while displaying remarkable chemistry with all of his co-stars.

Tyler Micoleau’s lighting design, with his smart sidelight and shifting color scheme, and scenic designer David Rockwell’s spare forest evocation, work well, as does Andrea Hood’s costume design, tracing as it does a loss of innocence through color: Little Red, the youngest, in bold red, followed by Jack in green, eventually giving way to drabber colors for the Baker and Baker’s Wife, as life has begun to let them down. Scott Lehrer and Alex Neumann’s sound design is crisp and certainly makes one believe that a giant and his angry wife could be stomping around the perimeter of the action. And the puppetry allows us to channel our imagination to allow a pair of oversize prop boots to represent the menacing Giant’s Wife inching closer.

Overall, though, this revival asks for fairly little — sit back and enjoy, but you won’t receive much else in return. So what, you ask? I sound too mean? What can I say? Nice is different than good.