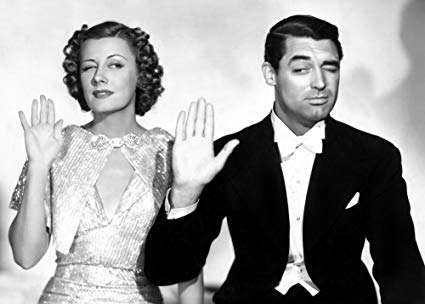 “Thanks, but you gave it to me for the wrong picture.”

Perhaps he was wrong, though. The movie he did win for, The Awful Truth, is one of the greatest screwball comedies of all time – and it was released 85 years ago today. The film stars Irene Dunne and Cary Grant as a couple too proud to make up after a series of misunderstandings, so they divorce. It’s only when they try to move on with their lives (with other people!) that they realize – no surprise – how drawn to each other they truly are.

McCarye makes the most of his stars. Dunne, who received her third Oscar nomination for the movie, was already established as a major star who was capable of comedy and drama. Grant, however, was still on his way up, and, one can argue, this is where his handsome looks, charisma, and penchant for vaudeville-based physical comedy, made him not just a star, but the Cary Grant we all know. (I certainly do.)

This film is essential. See it!