This week, one of the most celebrated stories in Japanese culture, Chushingura – 47 Ronin, will get a new stage adaption by the Amaterasu Za theatre company. This brand-new adaptation by Ako Dachs will premiere on October 18, 2022 in New York City.

Ms. Dachs took a moment out of her very busy schedule to discuss this upcoming production as well as her theatre company.

GSJ: What is the mission of Amaterasu Za, and what made you start the company?

AKO DACHS: Amaterasu Za is a unique Japanese-English bi-lingual theater company that I founded in 2018. The company intends to bring classic and contemporary Japanese theatrical works to English and Japanese-speaking audiences, as well as contemporary and classic works from western

Apart from a few rare visiting companies, Japan’s rich theatrical culture is still relatively unknown here. We realized that by creating Amaterasu Za we could bring some of this work to a culturally curious New York audience, and also provide roles for talented Japanese actors living in New York that are often overlooked because they are not native-English speakers. The company’s work has included two one-acts from Yukio Mishima’s collection of modern Noh plays, and a workshop production of a new English-language adaptation of a play by Chikamatsu Monzaemon, often called the Japanese Shakespeare, who wrote over a hundred plays that form the core of the 17C Kabuki and Bunraku (puppet) theater tradition.

GSJ: How would you describe Chushingura – 47 Ronin?

AD: ‘Chushingura – 47 Ronin’ is one of the best-known and enduring stories in Japan. It is based on a real incident that happened in Japan in 1703, and it has been immortalized in woodblock prints, books, films, manga, graphic novels, television, and plays ever since. There is even a short story based on it by Jorge Luis Borges. It endures because of its compelling themes of justice, honor, loyalty, and sacrifice.

A corrupt court official sets out to bring shame and embarrassment to a young lord at Edo Castle, and when this is discovered the young lord attacks and wounds him. As punishment for this attack, he is sentenced to die by seppuku (a form of ritual suicide), to be carried out that very day. His lands are confiscated, and his clan disbanded, but the corrupt official is not punished for his provocation. All his samurai were dismissed, making them leaderless samurai, or Ronin. This was widely seen as unfair, and after plotting for over a year, his loyal former samurai sacrificed themselves to take revenge and then join their young Lord Asano in death for this crime. Their sacrifice immediately made them popular heroes in Japan, standing up against a corrupt government for justice.

GSJ: Chushingura – 47 Ronin has had other artistic incarnations; what can audiences expect from this stage adaptation?

AD: The actual events involved lots of people, with many episodes, twists, and turns during the Ronin’s years of planning their revenge. Kabuki or Bunraku versions can take a whole day. I’ve focused on certain characters, and I’ve also tried to bring in a sense of the beautiful rhythms and power of classical Japanese language. The tale is narrated by the wife of the leader of 47 Ronin.

GSJ: For those that do not speak Japanese, will they be able to follow along?

AD: In order to give Japanese-speakers an opportunity to hear Japanese stories or western classics in their own language and give English-speakers access to new and classic plays from Japan unmediated by projected titles, some of our productions are presented in Japanese with English titles, and others in English with Japanese titles. In this production, the narrator speaks in English and the rest of the play is performed in Japanese, but titles are always provided so that everyone can understand everything.

GSJ: What can be learned from this classic tale?

AD: Well, I think in many ways it a very universal story, and can be appreciated on its own terms as you would a Shakespeare history play, understanding how people are motivated by greed and spite or loyalty, honor and a sense of justice, and struggle when their desires and obligations pull them in different directions. But at the same time, it does represent a perspective on these things from a Japanese cultural perspective.

GSJ: What is up next for you and an artist and for the theatre company?

AD: I’m planning to do ‘Okuni from Izumo’, the woman who created the ‘Kabuki theater form in the early 17C. “Ka” is a song, “Bu” is a dance, and “Ki” is acting so I could say it’s about the origin of the musical!  Okuni was a common girl who came to Kyoto with her friends to dance to raise money for the famous Izumo shrine. She was spotted by someone at court who exposed her to courtly performance practices. Later, Okuni created a company of dancers and musicians and started performing narrative and satirical dances in a dry riverbed in Kyoto which become very popular. She played male as well as female roles. They were soon famous and widely imitated.

Adapted and directed by Ako Dachs

They can be purchased by visiting https://amaterasuza.ticketspice.com/chushingura-47-ronin 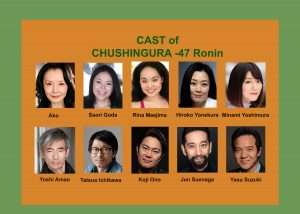