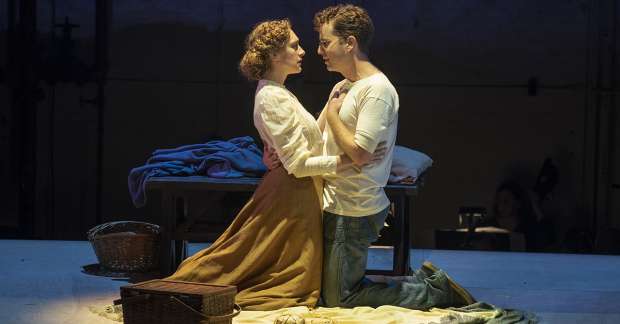 Once upon a time, New York City Center’s Encores! program enabled a unique kind of time travel, allowing audiences to watch on-book, staged remountings of shows that had closed years earlier – just enough to get an idea of the plot and score of shows that fans otherwise had no means of experiencing.

A few years earlier, these polished productions became something more akin to full productions, many of which feel like a tryout for a Broadway revival – or in the recent case of Into the Woods, a mere prelude to a press announcement that such a revival was a fait accompli. So, too, seems to be the case with Parade, a beloved show in small circles of theatre obsessives that had a brief Broadway run in 1999, and helped but composer-orchestrator Jason Robert Brown on the map (he won a Tony, as did Alfred Uhry for his book).

Parade tells the story of the last several years of Leo Frank (Ben Platt), wrongly charged with the terrible murder of Mary Phagan (Erin Rose Doyle) and later the victim of a lynch mob. A Brooklyn transplant working in an Atlanta pencil factory and in a semi-estranged, distant marriage to Lucille (Micaela Diamond), Frank became the fall guy when both he and the factory’s night watchman, Newt Lee (Eddie Cooper), were both arrested when Phagan’s body was discovered. Politics being politics, fingers were not pointed in equal measure. Atlanta prosecutor Hugh Dorsey (an excellent Paul Alexander Nolan), with higher ambitions, knew that convicting another Black man would not be enough to placate an antisemitic and racist public, and so he reverse-engineered a narrative ensured to put Frank away.

Visually, Arden eschews nuance in every direction, trying to connect the dots between hate cries of yore and those in recent memory. He slows down a salute by Confederate soldiers to emphasize how their actions resemble the Nazis doing a Sieg Heil salute. Additionally, he has set designer Dane Laffrey construct a raised wooden platform that evokes both a minstrel show and a gallows, and that is cloaked with stars-and-stripes buntings that bleed into dirt, suggesting the death of democracy. Projection designer Sven Ortel also projects images of the show’s historical characters’ real-life counterparts, with some text scroll that seems like an intern cribbed it straight off of Wikipedia.

One blessing of this production is that Brown himself conducts the orchestra (Don Sebesky did the original orchestrations), under the music direction of Tom Murray, and his exquisite score sounds pristine. (Fun fact: his wife, Georgia Stitt, plays the keys). Again, though, not everyone in the audience has a great view of the orchestra; while visible to the mezzanine and balcony, they may be more obscured to the high rollers and critics who are seated in the orchestra).

It’s the great members of the Parade cast who really draw out the pathos of this tragic American story. In addition to the great work from Grayson, Johnson, and Nolan, Sean Allan Krill is terrific as the Governor Slaton, whose efforts to commute Frank’s death sentence ultimately prove futile.

While Platt struggles with a consistently unsteady vibrato and out-of-period line delivery, with a gorgeous voice, sweet countenance and presence beyond her years, Diamond is, well, aces as long-suffering Lucille. She already announced herself as a major phenom in The Cher Show, and whether it’s her searing solo work on “You Don’t Know This Man” or her work on the duet “All the Wasted Time,” she proves to be an indomitable stage force. I said before she would have been the perfect casting solution if ever there was a Funny Girl revival; casting her in the subsequent first revival would have prevented a lot of problems and ill will along The Great White Way last season. That she didn’t become Fanny Brice is a crime – though nowhere near the terrible ones at the center of this Encores! revival. That we get to see it here after all these years, however, is the reward we all deserve.