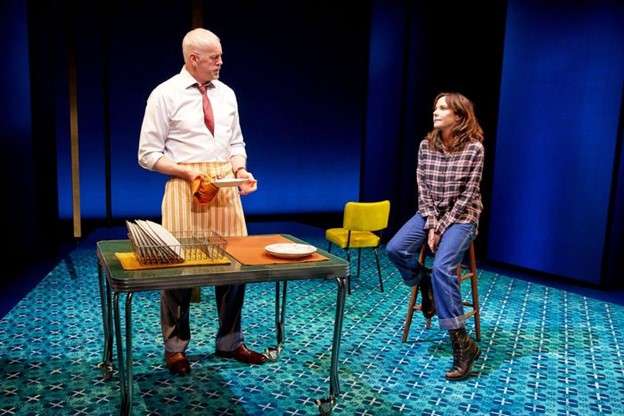 A unique kind of excavation is currently happening at the Samuel J. Friedman Theatre – a kind of time travel, if you will. A quarter-century after Paula Vogel’s How I Learned to Drive opened off-Broadway at the Vineyard Theatre (and went on to win the Pulitzer Prize), it has transferred to Broadway with its two leads, David Morse and Mary-Louise Parker, and director, Mark Brokaw, intact.

An important show upon first premiering, Drive has only proven to be more topical and resonant, even though this shifting memory play is concretely set in the past. We begin in 1969, as the then 17-year-old Li’l Bit (Parker) joins her romantic partner (Morse) in a car. He’s older than her, confident, persuasive. They negotiate what they’re about to do, and he removes her bra and her top. And then the penny drops: she calls him Uncle Peck.

This is not some perverse sort of role playing, to be clear. Peck is indeed Li’l Bit’s uncle, and they have had a sexual relationship, we learn, for years, even before he started taking her out for de facto driving lessons. Vogel then takes us back further in time, and we can see Li’l Bit interacting with Uncle Peck at various ages going all the way back to when she was eleven years old, all with Parker portraying the young woman – young girl – at all times.

We see Uncle Peck take her out to dinner to celebrate her sixteenth birthday, allowing her to get  drink on multiple martinis while paying off a waiter for his silence. (Peck himself is a recovering alcoholic, and whatever the signs of his struggle are, they go over his niece’s head). In another scene we see Peck, an amateur photographer, taking photographs of the thirteen-year-old Li’l Bit, charming her to pose while reminding her, “There’s nothing wrong in what we’re doing. I’m very proud of you.” Morse expertly plays out the dance between power and charisma his age gives him over his niece. He’s essentially a movie star, a rock god, to her, and all she wants is not to disappoint him. “We’re just enjoying each other’s company,” he insists. “I’m a patient man,” Peck says, then and at other times, suggesting that however he may protest that their dalliances are natural, he’s too slick not to know exactly what he’s doing.

So, yes: Drive is a play about molestation, treated delicately and, largely, euphemistically. None of this makes the play, and this superlative production, any less devastating. Emotionally scathing but dramatically spare, Vogel also offers clues into Li’l Bit’s home life, showing how her rough environment helped enable her to become prey. Li’l Bit lives with her mother (Johanna Day) and grandparents (Alyssa May Gold and Chris Myers), none of whom provide the comfort or support she deserves. (Day, Gold, and Myers also play other peripheral characters, sometimes to limited believable effect, serving as a fluid Greek chorus).

When Li’l Bit announces she wants to further her schooling, her grandfathers responds by saying: “Shakespeare is really going to help you in life.” Her mother nicknames her after her genitalia, but when she develops and turns out to be well-endowed, her relatives make her the butt of insensitive jokes, only Uncle Peck proves to be attentive to her. Long before grooming proved to be a cultural watchword, his behavioral traits of listening and alert attention clue the show’s audience into his true intent in ways that that Li’l Bit is too naïve and flattered to understand.

Vogel structures Drive through the prism of Li’l Bit’s memory, which makes her trustworthy but not altogether reliable. It takes a while for the audience to take in the full weight of Uncle Peck’s infractions, but it’s to the credit of Vogel’s structure and Brokaw’s direction that while the play is non-linear, the emotional toll is cumulative. The hits come especially hard in a pair of scenes, one of which shows Peck’s wife (also portrayed by Day) villainizing Li’l Bit – even adding her own version of “I’m a very patient woman” – and then in a harrowing hotel encounter when Li’l Bit has decided she must end her relationship with Uncle Peck for good. What do you do, this play asks, when love and hurt feel interchangeable?

The miracle of this production, of course, isn’t just the superlative work being done at the Friedman, but that this play seems to have essentially been rebooted with the same verve it had with the same core creative team that it did in the late 1990s. Those who only know the show by reputation, from reading it, or seeing Second Stage’s 2010s revival now have a chance to appreciate it in all its original revelatory glory (Day, too, was also part of the cast at the Vineyard), a rarity if every there was one in the world of theatre, particularly spread out over decades.

This means you get the chance to witness Parker’s soulful turn as Li’l Bit, all confused compunction and physical awkwardness – that signature laconic snarl serves her well here. And the ever-underrated Morse, in one of the great recent stage performances, astonishes in ways both hushed and pronounced what cruelty looks like right in the light of day. Think of the how close the scene in which he chillingly schools Cousin Bobby on the fact that real men cry cuts to the bone. Yes, Manhattan Theatre Club has allowed audiences to revisit a veritable artifact of theatre history – enter at your own risk.

How I Learned to Drive

The Tudors Exhibit at the Metropolitan Museum of Art