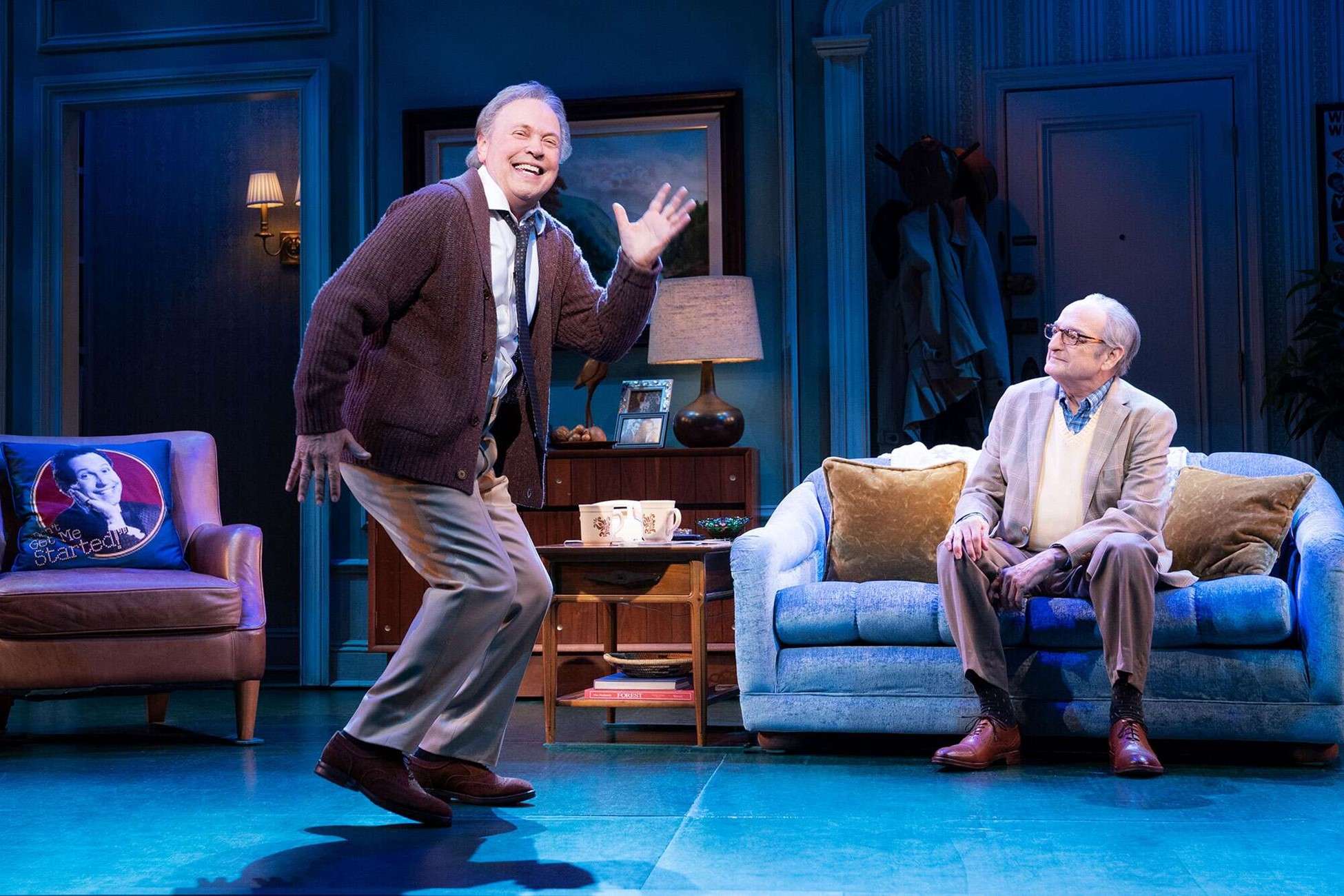 Having recently starred in When Harry Met Sally… and City Slickers, and amid acclaimed Oscars hosting gigs, Billy Crystal was at the height of his career power in 1992 when he opted to make Mr. Saturday Night his feature directorial debut. The film, about a failed comedian looking for career rebirth and personal redemption in his twilight years, did not do particularly well and largely faded from memory.

Much like its protagonist – who is not actually named Mr. Saturday Night but instead a man who goes by the moniker Buddy Young, Jr., – the property itself is getting a second chance to be discovered, in the form of an original new musical that just opened at Broadway’s Nederlander Theatre.

Crystal has again joined forces with the ace writing duo of Lowell Ganz and Babaloo Mandel from the film to transfer the story to the stage. Much of it – perhaps too much of it – remains intact. A random error at the 1994 Emmys resurrects fleeting interest in him (the film was set in 1992; I’m not sure what setting the show two years later accomplishes, as the book still has the occasional idiosyncrasy) after he self-sabotaged a promising comedy career decades earlier. A new, younger agent, Annie (Chasten Harmon) might be able to help capitalize on this newfound boon – but Buddy has to learn how to get over himself and try to heal rifts with his wife, Elaine (Randy Graff), daughter, Susan (Shoshana Bean), and his brother and former manager, Stan (David Paymer, who also played the role in the film).

Though the show, calm and aimed at older, nostalgic audiences, improves upon the film – which, like Crystal himself back then was tougher, flintier, desperate to appear edgy – in some ways, its premise stretches itself too thin. The movie focused on the fractured relationship between Buddy and Stan, with many more scenes taking place in flashback (thus requiring the performers to film less in makeup as the septuagenarian versions of themselves). It was believable and measured, with Crystal and Paymer sharing a warm chemistry and constantly playing to each other’s dramatic strengths, resulting in an Oscar nomination for the deserving Paymer. The Stan scenes are fewer in the show, and there’s less fire between the two of them. His relationship with Elaine is also underbaked. We’re to intuit that she has supported him while he has neglected her, but to what degree is left unclear. Either way, the always wonderful Graff is saddled with the show’s most disposable number, a fantasy about vacationing to Tahiti that calls back to nothing in the show.

The show then pushes the father-daughter relationship more, but never all the way to the center stage. It, too, feels underbaked, with little reason given as to why they might be so estranged. Surely more than the fact that she stopped appearing as his daughter on his own show in the 1950s and his insistence in steering her away from bad choices are to blame for such vitriol? Her big number, “Maybe It Starts with Me,” goes nowhere, since the character immediately abandons accountability for the duration of the show once done. It’s bad enough that there’s no emotional accumulation from these storylines. But the writers are also guilty of fiat in that Buddy’s redemption arc involves no actual obstacles. He keeps making the same mistakes, suffers no consequences, and ultimately gets what he wants.

Mr. Saturday Night is the latest example of a film from 1992 that has been translated to the musical stage, after such others as Aladdin, The Bodyguard, Newsies, Leap of Faith, Sister Act, and Honeymoon in Vegas – the last of which also played at the Nederlander and also had a score by Jason Robert Brown. He’s back, doing the music and orchestrations and teaming up with lyricist Amanda Green on a series of jazzy but forgettable songs that do nothing to advance either plot or character. (David O. conducts the six-piece orchestra, and Kai Harada worked on the sound design, both of which are excellent.)

Director John Rando keeps all the pieces moving apace and gets warm performances from his entire cast, which also includes Jordan Gelber, Brian Gonzalez and Mylinda Hull in a series of past and present ensemble roles. Set designer Scott Pask does an equally effective job of recreating both 1950s and 1990s locations onstage, although hair and wig designer Charles G. LaPointe can only do so much to make us believe that Crystal and company are in their twenties in the Catskills flashback scenes.

Does any of this really matter? Mr. Saturday Night, in film form and now on stage, is a star vehicle, and if, like me, you fall prey to Crystal’s bent with comedy, he’ll reel you right in. “Folks, if you’re having a good time, tell your face,” Buddy says in an early scene, “I know some of you are sad. You’re still sitting shiva for Lincoln.” The show is at its best when replicating the ribald humor of the Borscht Belt, and goes out of its way to salute the greats of the past, from Moms Mabley to Phil Silvers, from Sid Caesar to Jackie Mason (projection and video designer Jeff Sugg riddles the stage with images of their like throughout the show). If when the movie of Mr. Saturday Night was made, Crystal strove to emulate them, now, as this show reaffirms, he can count himself among them.