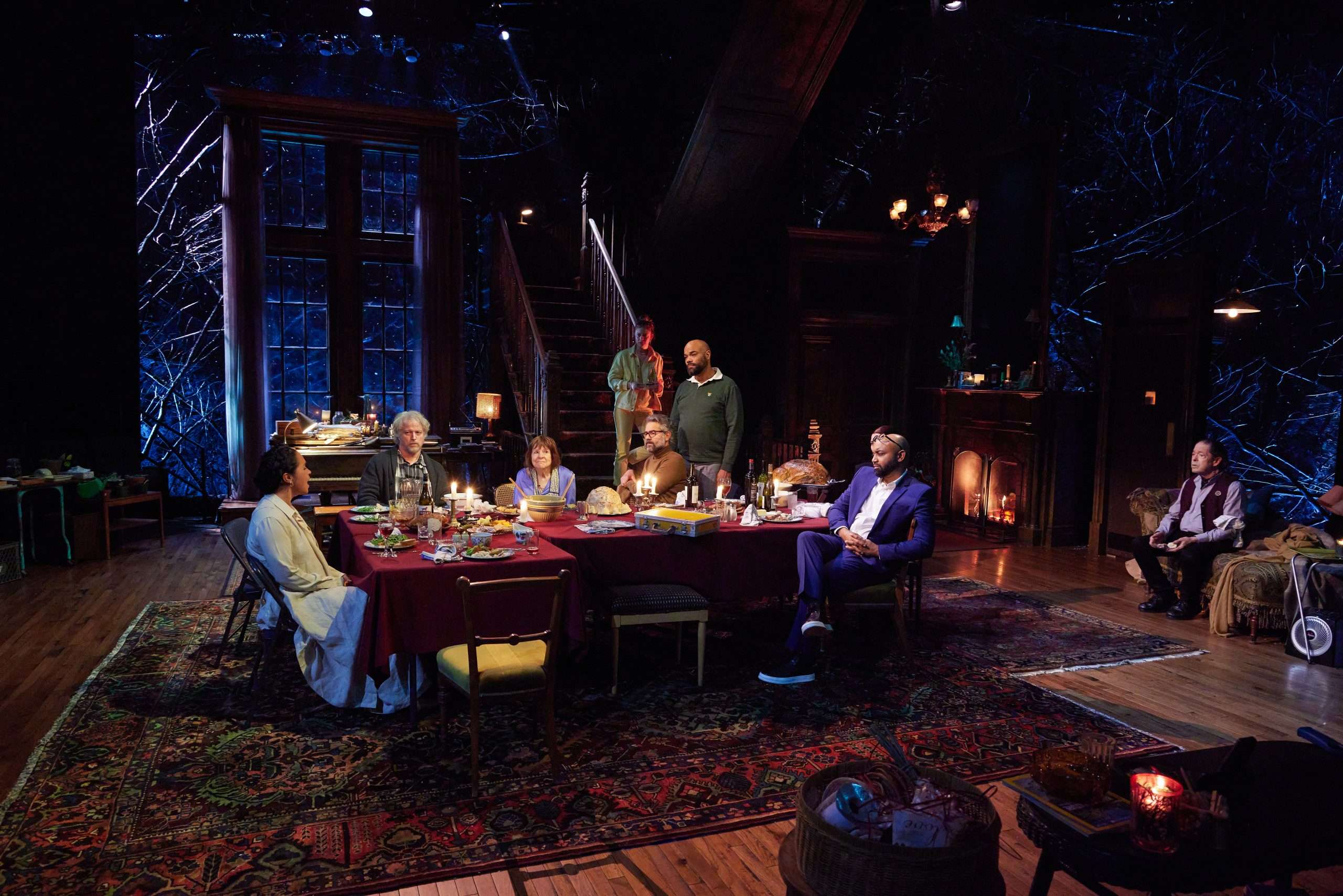 The idea of a bunch of semi-strangers all convening in the cold of January 6 will likely forever have ominous connotations, but playwright Brian Watkins has a different sense of foreboding in mind for the gathering he has crafted in Epiphany, which just opened at Lincoln Center’s Mitzi E. Newhouse Theater. His dinner party drama takes root in the traditions of country house mystery, farce, and more specifically, James Joyce’s The Dead, but Watkins hasn’t taken the appropriate notes to make this play succeed on any terms of its own.

Which isn’t to say that Epiphany doesn’t have a lot going for it. It is a gorgeously adorned production, with lighting designer Isabella Byrd nuanced, atmospheric candlelit scheme being the true star of the show, and John Lee Beatty’s set design – snowy exteriors, multi-level wood interiors – not far behind (with one catch; wait for it).

And director Tyne Rafaeli has assembled an excellent nonet of performers, all of whom do their best to try and inflect Watkins oblique touches with a sense of purpose and history. They’ve gathered for an evening at the house of Morkan (Marylouise Burke), a sexagenarian who teeters somewhere between doddering and eccentric; she has invited them over after an unspecified period apart, for reasons left unknown – a coded but unsubtle reference to the pandemic, one of many touches Brian Watkins has thrown in here, some of which accumulate into something emotionally meaningful, some of which fall to the dramatic wayside – to celebrate the Feast of the Epiphany.

The guests include the alcoholic teacher Freddy (C.J. Wilson, excellent), who seems to have already imbibed a few upon arrival; the couples Charlie (Francois Battiste), a lawyer, and Kelly (Heather Burns), a pianist, and psychiatrist Sam (Omar Metwally) and his husband, Taylor (David Ryan Smith); and Ames (Jonathan Hadary), a friend of Morkan’s and her absent sister Julia. Morkan has also recruited Loren (Colby Minifie), a young vegan in her twenties, to help with hosting duties.

It seems a few of the guests know each other, though others do not, and many of their connections remain largely unexplained. But everyone in attendance looks forward to reconvening with Gabriel, Morkan’s nephew and a celebrated writer, who Morkan hopes will provide context for the Epiphany. His expertise is sorely needed: The guests are all unprepared – they’ve not even seen, let alone read, the attachments in Morkan’s email invitation, so they will be unable to recite any of the poems, sing any of the songs, or dance as she had intended. They don’t really know what the Feast of the Epiphany is even about.

Alas, there will be no Gabriel. He has chosen not to show up, while sending his girlfriend,  Aran (the lovely Carmen Zilles, costumed by Montana Levi Blanco and lit by Byrd to look ethereal) – a stranger to all – with the matter-of-fact explanation that he has “sunk into a very deep depression.”

If the show’s craftspeople, including Beatty, Byrd, and sound designer Daniel Kluger, whose subtle but omnipresent rumbling sound design, have set the tone for the show, it’s this line that sets the mood for Epiphany, a capital-letter Commentary on How We Live Now. Morkan’s guests don’t really know how to function in the world, and they all retreat into their own interior worlds at group events like the dinner. “This is probably only the second group dinner I’ve been to in, like, a long while,” Charlie says. “It used to be we’d do this all the time, I think. Even though we didn’t have to, we’d do it.”

To combat this, Morkan has asked her guests to surrender their cell phones, which she keeps in a box away from the food. Aran doesn’t even need this gesture, since she herself has already abandoned her phone, having tired of social media after it had a deleterious effect on a friend’s child. “After that, I couldn’t really look at my phone or scroll or whatever without, like, wincing, without my soul wincing, like a poison was entering through my eyes.”

Eventually, this artful talk just becomes alphabet soup. When Charlie later says, “It seems like we’ve all forgotten the miraculous reality that there is Something and not Nothing,” Sam’s response is that “something might be Nothing at all…no meaning, no purpose, no reason…that’s it’s all just…random… Nothing.” Huh? You may also notice the Biblical references, like Gabriel, and with Ames’ reference to “Suffering Servant,” a passage in The Book of Isaiah that adumbrates the birth of Christ.

And then, of course, there’s the amount that Watkins pulls from The Dead, from the use of the Morkan name to the goose that’s served as the main course. It’s cute to play “Name That Reference,” but Watkins is pulling a lot from existing text to work within subgenres that he never attempts to subvert. Epiphany (which first premiered in Ireland in a Druid Theater Company in 2019), is full of philosophical and religious allusions, but they often feel derivative – no observation ever leads to the titular revelation.

But Rafaeli has directed her cast to treat this play as gospel, and they all rise to the occasion, with Hadary’s very humane presence and Zilles’ angelic one being particularly affecting as the play reveals itself. Battiste, Burns, Metwally, Minifie, Smith, and Wilson all lift up the action with verbal dexterity and physical commitment (you can chart the effect alcohol has on each of the characters who partake), even when the humor feels a little pat.

But if there’s any sense of discovery here, it’s Burke – the stage’s original Kimberly Akimbo – who graduates to a newer plane as a performer here, shedding her familiar fussy tics and delivering a Morkan whose frustrated, passive-aggressive tics allow her to lose and pull focus s she desires. Morkan has figured out a way to navigate the world exactly as she chooses, and Burke seems to understand her at a cellular level. (Still, one shakes their head as to how she navigates her kitchen. The windows in Beatty’s set show a clear view of the blizzardy outdoors; when Morkan enters the swinging door that takes her to the kitchen, isn’t she really exiting the house?)

Alas, a lot of Epiphany is all talk. An enormous amount of what we see feels like merely a prologue. It’s only when characters start to quiet down and make their exit. The show, which clocks in at just under two hours with no intermission, is oddly rear-loaded; Watkins has actually created a stunning end, that, when fused with all of its sound and lighting wonderment, creates the show’s first grace note. You’ll wish for Epiphany to have included more of that.

See What He Did There?