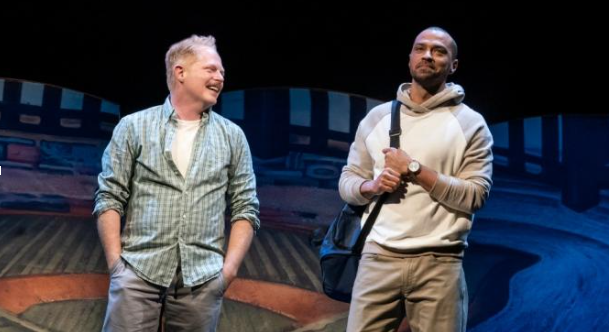 A winning ensemble helps lift up the Richard Greenberg revival

Take Me Out, Richard Greenberg’s play about baseball, sexuality, and a whole bunch of things that fall in between won the Tony Award for Best Play, Broadway’s equivalent of taking home the pennant, in 2003. Almost two decades later, the show’s first Broadway revival, directed by Scott Ellis in a Second Stage production at Helen Hayes Theater, begs the question: can Greenberg’s calculus hold up in an increasingly nonbinary world?

A lot of what first worked then still works now. Unprompted by anything, superstar slugger Darren Lemming (Jesse Williams), of the fictional New York team the Empires, announces his homosexuality. He’s not in a relationship or at risk of being outed by the media or a jealous ex-lover; in fact, sex doesn’t seem to factor in much all in his life. He tells us (and, as in many Greenberg shows, the play tells more than it shows): “If I’m gonna have sex – and I am because I’m young and rich and famous and talented and handsome so it’s a law – I’d rather do it with a guy, but when all is said and done? I’d rather just play ball.”

Equal parts arrogant and self-aware, the biracial Darren (a theatrical stand-in in many ways for Derek Jeter, then the most famous face of baseball at the time of this play’s initial production) is conducting a kind of sociocultural litmus test for himself. Is he indeed so rich, famous and protected that in living his truth, he can withstand scrutiny from his fans and teammates alike?

Early reports would indicate yes, but the arrival of Shane Mungitt (Michael Oberholtzer, excellent), an athletically talented but socially stunted relief pitcher sent up from the minor leagues, kicks off a domino effect that both has almost nothing and also almost everything to do with Darren’s personal life. Shane proves to be bigoted and is suspended as punishment. But suddenly the Empires begin losing and need Shane back, leading Darren to lose faith in his team and Major League Baseball as a whole, and also culminating in a devastatingly violent moment.

In its initial production, the way Greenberg built issues of racial and sexual identity felt almost facile, his characters mere prototypes. It seemed almost lazy to stack as many transgressions on Shane as this play does; the character felt two-dimensional. Now, Shane feels more believable. So, too, does the way the Empires’ Asian and Latino players self-segregate. And the way both Shane and Darren’s friend, Davey Battle (Brandon J. Dirden, so good you wish the play had more of him to offer), a player for another team with religious beliefs, embody deep-seated homophobia, feel natural instead of convenient. (This production also benefits from Bray Poor’s sound design replicating the sounds of balls being hit hard and of games in progress.)

But Ellis’ production also reminds us that much of what doesn’t work now also didn’t work then. Namely, the shower scenes (the functioning showers, and rest of the fast-moving set, are designed by David Rockwell), the show’s raison d’etre. Take Me Out famously sold itself on the opportunity to see the full-frontal nudity of its male cast over the course of several different shower scenes, and Greenberg can only partly make a case for this being anything but gratuitous. (And the production doesn’t trust its audience, who must place their phones in Yondr pouches to prevent photography.)

These scenes are supposed to show the Empire teammates’ discomfort once Darren has come out, but the play lacks a “before” scene to show the men at total ease with one another before the equilibrium has been disrupted. In order for the shower scenes to work, the audience members need to see how a sense of safety among these avowed heterosexual teammates has shifted before the play can further dive into the why of it all.

Greenberg also strikes out several times with his diagrammatical characters, including Kippy Sunderstrom (Patrick J. Adams, affable, fine), the play’s primary narrator who seems to know and share all but remains something of a cipher, and Mason Marzac (Jesse Tyler Ferguson), the awkward accountant who discovers a love for baseball when Darren turns to him for financial advice. It’s not that the character is flawed in any way (it isn’t; his outsider’s eye can connect to the audience) or that Ferguson is miscast in any way (he isn’t; he’s actually self-effacing and sweet as honey), but Ellis’ production really emphasizes how far to the sidelines Mason ultimately sits.

And I still can’t jive with Greenberg’s conception of Darren, a character who never really seems to exist in the real world. Darren would never be as successful as he’s supposed to be without famous friends and high-profile relationships, both of which he apparently eschews with little explanation. Leave it to Grey’s Anatomy alum Williams, though, to hit the ball out of the park. Effortless and moving, he suggests equal parts confidence, compassion, and confusion when needed. If Greenberg’s deep dive into the intersection of class, race, sexual preference and toxic masculinity sometimes comes up a bit shallow, then this actor is the one you want on your team. He’s nothing short of a phenom.

Gone In the Night