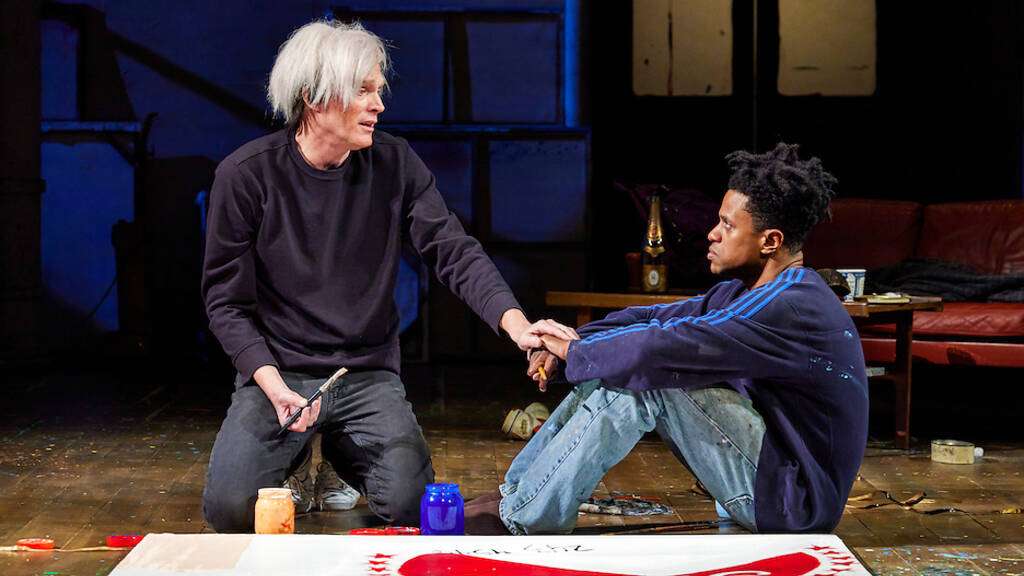 Playwright/screenwriter Anthony McCarten has written biographical dramatic works of subjects including Winston Churchill (Darkest Hour), Stephen Hawking (The Theory of Everything), Freddie Mercury (Bohemian Rhapsody) – all of which won Oscars for their leading actors – and Whitney Houston (the newly-released I Wanna Dance with Somebody) – which looks like it won’t do the same for its star. (He also wrote the book for the current new Neil Diamond bio-musical A Beautiful Noise).

Quantity doesn’t always equate quality, however, and his other new play to hit Broadway, Manhattan Theatre Club’s The Collaboration, feels a bit more pedestrian, despite its over-the-top subjects: Jean-Michael Basquiat (Jeremy Pope) and Andy Warhol (Paul Bettany). McCarten fictionalizes the interactions between the two artists in the 1980s. (It actually began as a three-way collaboration, with Italian painter Francesco Clemente.)

The Collaboration doesn’t have much in the way of plot, but McCarten stencils in events: Basquiat’s ex-girlfriend Maya (Krysta Rodriguez), a cardboard character, arrives at Warhol’s studio to deliver the news of fellow graffiti artist Michael Stewart’s deadly beating, of her intended abortion, of her expectation that Basquiat and Warhol will copulate, and that a major auction house wants to bid on her fridge. It also seemingly seeks to bring down the view of Warhol as anything but a prudish fool, while building up Basquiat’s potential. Bother performers do what they can here, but the real star of Kwame Kwei-Armah’s production is the wig design work of Tommy Kurzman.