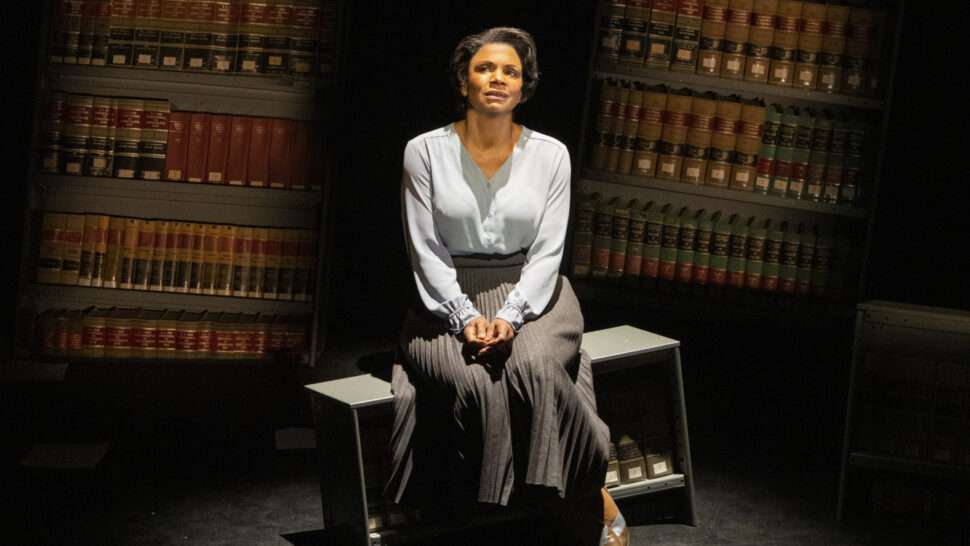 Talk about a case of delayed gratification: Despite a checkered career that includes a lifetime Obie Award, a Gold Medal for Drama from the American Academy of Arts and Letters (one of only five playwrights!), and induction into the Theater Hall of Fame, esteemed playwright Adrienne Kennedy is enjoying the first production of a work of hers on Broadway. With director Kenny Leon at the helm, and at the newly re-minted James Earl Jones Theatre, Broadway audiences can now experience her work with The Ohio State Murders. Buyer beware: this show is a curious choice, putting its writers schematic skills on display but also recognizing its limitations as live theatre.

Leon has drawn as big a gun as he can to serenade Kennedy’s arrival – Tony Award magnet Audra McDonald plays acclaimed Black writer named Suzanne Alexander, a semi-autobiographical character Kennedy wrote about across several of her plays during the 1990s. Suzanne is addressing an unknown group as she returns to Ohio State University (Kennedy’s real alma mater), and explains that the violence depicted in her works (the specific context of things like “bloodied heads, severed limbs, dead father, dead Nazis” is never specified to too great an extreme) stems from known experiences.

It’s there that Kennedy’s style aligns itself to be more a thesis than a dramatic narrative: Suzanne relays the racist, often horrific treatment she experienced as a student in the late 1940s and early 1950s, her speech takes the form of concentric circles closing in on each other as they approach the target: she introduces the what, then describes something else, gets back to the who, after a while returns to the how; we don’t always even get to a why.

As one of maybe a half dozen Black female students at her Columbus university, Suzanne was ostracized by her white peers and denied equal access to the classes her fellow prospective English majors can easily enjoy (“It was thought that we were not able to master the program.)” In the play’s original 1992 production and its New York premiere in 2007, two actors of different ages shared the role of Suzanne. Here McDonald remains onstage throughout the show’s entirety of 80 minutes or so, easing back and forth between Suzanne’s younger days (when she was known as “Sue”) and as an established author – and McDonald easily suggests the shifts between the younger student, open to the world and desirous to take it in, and the older author, calcified by cruelty and by time. (Allen Lee Hughes’ lighting also helps with the toggling back and forth.)

There are two main stumbling blocks at play in this production, however, starting with Leon’s staging. One senses that director wants to make Kennedy’s tale, an extended monologue, increasingly theatrical – but his choices feel lazily elementary. When discussing a viewing of Eisenstein’s The Battleship Potemkin, projection designer Jeff Sugg projects images from the movie behind them. McDonald also must rely on pantomime to portray Sue’s twin daughters by holding two pink scarves. (Other technical choices, like set designer Beowulf Boritt deconstructed library vortex, with bookshelves floating around as though a tornado has just torn through it, do a better job of complementing Kennedy’s conceptual suggestions of violence).

About those children: they are, essentially and tragically, the titular murders, and Kennedy’s decision to have Suzanne merely orate, time and again, that they were killed, is the antithesis of high drama, which requires obstacles and conflict, interaction and rising action, a journey that escalates in some way, rather than the mere description of something awful. Her elliptical approach can make for rich, careful study, but it evades the most human elements of storytelling – Leon even seems to want to usher his other actors (Mister Fitzgerald, Lizan Mitchell, Bryce Pinkham, and Abigail Stephenson offstage as quickly as possible each time.

And so Murders, which is neither a mystery nor suspenseful, and which is truly an extended monologue, becomes a strangely untheatrical choice. On the page, the symbolism of her work is clear – her use of Tess of the D’urbervilles as a reference point for Sue points to violence and misogyny – but onstage, it’s more a case of being told than shown. Adrienne Kennedy is absolutely a creative force worth celebrating. Yes, with this production, something has been ventured, but I’m not sure how much is gained here.

Marcel the Shell With No Shoes On