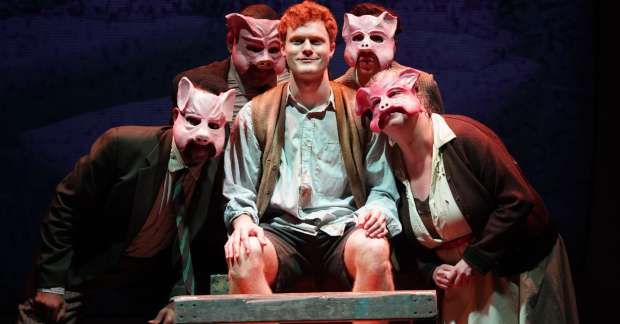 Growing up isn’t easy, especially when you’re poor, have an abusive, alcoholic father and a mother who is mentally at sea. Patrick McCabe knew this, and his trenchant 1992 novel The Butcher Boy examined, with mordant humor, how both nature and nurture can erode the humanity from a growing boy with limited control of his own circumstances.

Unlike Neil Jordan’s 1998 film adaptation, the new musical production of The Butcher Boy that just premiered at the Irish Repertory Theatre under direction from Ciaran O’Reilly, is more interested in effect than in cause. Which means that the teenage Francie (Nicholas Barasch, carrying this show as though he were Atlas) remains a cipher. Asher Muldoon, who adapted the book and composed the musical’s score, has crafted an oblique horror tale that opts out of psychological and social depth (and abandons the comedic razor’s edge of both McCabe’s novel and Jordan’s more successful film) in favor of a flatter, more episodic plot that shocks but rarely surprises.

Still, let’s give credit where it is due: Muldoon has made his debut in the world of New York theatre while still an undergraduate in college! A rising senior at Princeton University, Muldoon discovered the novel in his teens and envisioned it as a stage musical. The pure plot has all the makings of effective stage fodder. Raised by emotionally distant parents (played impressively by Andrea Lynn Green and Scott Stangland), when he is not hanging out with his friend Joe (Dan Macke) – and sometimes taunting nerdy classmate Phillip (Daniel Marconi), Francie turns to his comic books and television for comfort, including Westerns and science fiction tales like The Fly and episodes of The Twilight Zone (with set designer Charlie Corcoran’s set including a large 1960s television screen to emphasize the power it wields over Francie, himself growing further unstable).

These influences provide a refuge for Francie, but in allowing him to escape the world, they further reduce the internal tools he has to understand what’s happening around him. He retreats into an interior world that Muldoon’s musical determinedly avoids opening up to the audience, except for the appearance of pigs, a reference first triggered by Phillip’s insulting mother (Michele Ragusa). The pigs, a quarter of performers (Teddy Trice, Carey Rebecca Brown, Polly McKie, David Baida) sort of serve as the proverbial devil on Francie’s shoulders while wearing masks fashioned by Stanley Alan Sherman. They bring the darkness, regularly appearing to offer comfort to Francie while signaling to the audience that something is wrong. (Lighting designer Kat C. Zhou’s use of saturated colors helps shed, well, light, on the fact that something must be very amiss in Francie’s mind.) At least that’s the attempt.

The problem in The Butcher Boy is that we just don’t know what. Muldoon seems distracted by other threads with potential. He’s equally interested in the townspeople Francie encounters – a side plot about an unrealized romance between Francie’s uncle Alo (Joe Cassidy) and Mary (Conte, who plays a multitude of roles, many of which are named Mary) is heartrending but belongs elsewhere – as he is in Francie’s episodic sequences, and so his show ultimately loses focus. He also burdens Barasch with a load of exposition, some of which is unreliable, and this overload of telling rather than showing gives Butcher Boy a feeling of inertia. Muldoon wants to catch his audience off-guard with reveals about characters’ deaths and disappearances, which strips the show of any commentary about the flawed institutions that enable these tragedies to happen.

Additionally, neither Muldoon’s music nor O’Reilly’s staging offer a true sense of place or purpose. Nothing about the score suggests something specific to time or place. Very little feels authentically Irish, or echoes the sound of the sixties, though the orchestra, dubbed the “Slaughterhouse Five” and conducted by David Hancock Turner, plays it with gusto, and M. Florian Staab’s sound design deserves special applause for his purity of sound. But the general sense in O’Reilly’s production is actually generic: this could have just as easily taken place in small-town post-war America. (Orla Long’s costume design grounds the characters appropriately, though.)

The production does a grave disservice to Barasch, who has been impressive since his days as a child actor and who tries to inject real darkness into Francie despite a conceit that only allows him to play into the fantasy elements in Francie’s mind. At some point, Muldoon needs his audience to witness Francie confront the comfortable world in his head against the horrors of the one in which he lives.

The rest of the cast does a fine job, especially the ones playing multiple roles. Cassidy, Conte, and Ragusa are all quite convincing, and Green and Stangland provide an inner life for their characters that doesn’t seem to exist in the script.

It’s hard to theatricalize mental illness, and it’s even harder to make an unreliable narrator out of a musical protagonist. At least with film, a director’s techniques can simulate and supplement, even subvert, a character’s interiority. On stage, The Butcher Boy falls victim to a frequent fate for adaptations and becomes too presentational. If what you see isn’t what you’re supposed to get, you often have to tell your audience what to expect. The Butcher Boy erupts in a fit of violence that it never adequately prepares one for. Like its main character, Muldoon’s adaptation is seemingly unaware of its own danger.

Scandal in the Wind