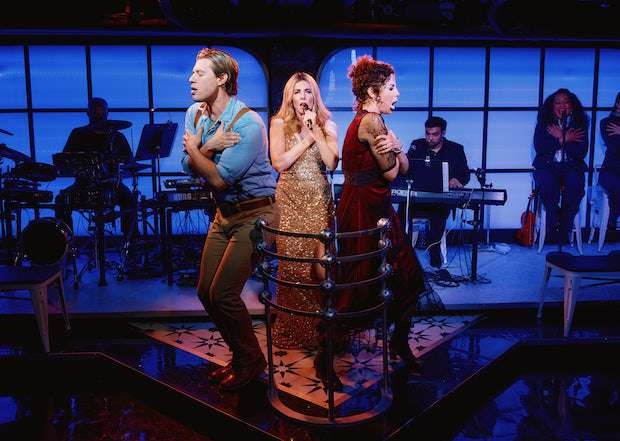 Question: How do you belt to the rafters when your theater is only eight feet high?

Answer: With all the abandon in the world – especially if you’re international singing sensation Celine Dion, who serves as both emcee and star subject in the new musical Titanique, a parody musical now playing at Asylum NYC.

Titanique is right at home at this venue, which, situated in a basement directly beneath Chelsea Gristede’s, was the New York base of improv and sketch comedy mecca Upright Citizens Brigade. Among the many live performances they put on was an annual spoof of a beloved movie (I once had the privilege of standing in the audience next to Amy Poehler as she waited to go on for a scene if their Pretty in Pink takedown). It’s a small, claustrophobic space, but perfect for a party.

And a good time is what Titanique really wants to be. The creation of director Tye Blue and stars Marla Mindelle and Constantine Rousouli, the show is a love letter to that moment when two epic phenomena – James Cameron’s high-grossing Best Picture winner Titanic and Dion’s record-shattering career – collided. The show begins during a Titanic museum tour, where the pop singer (Mindelle, a standout in Sister Act) emerges and declares that she, too, was on the Ship of Dreams, and has her own reflections of how events unfolded before and after that darn iceberg.

We are then transported to the ship itself, where we encounter some very familiar characters: Jack (Rousouli), Rose (Alex Ellis), Rose’s fiancé (John Riddle), Molly Brown (Kathy Deitch), the captain and shipbuilder (Frankie Grande), all referred to as “Victor Garber here, and Rose’s mother (Ryan Duncan, in the show’s first but by no means final nod to drag). What ensues is a greatest hits reverie, supplemented by Alejo Vietti’s kitschy costumes. Dion hovers throughout, narrating the (revised, sometimes) action and sometimes using the cherry-picked favorite plot points to launch into songs from her catalog, with the only carryover from the movie itself, being, of course, the chartbusting “My Heart Will Go On.”

In a sense this is similar to such other recent ‘90s throwback musical adaptations as Clueless and Cruel Intentions: The ‘90s Musical Experience (in which Rousouli also appeared, then as Valmont), which plucked hits from that era and plopped them into the show. Some of these choices work better than others – “I Drove All Night” and “I’m Alive” make logical sense, and Riddle croons “Seduces Me” with just the right amount of theatrical flair. Other numbers, like “Because You Loved Me” and “Where Does My Heart Beat Now?,” even “Beauty and the Beast,” feel more shoehorned in. (Music supervisor Nicholas Connell does a superlative job with the arrangements and the orchestrations.)

Titanique treats its subject matter with equal parts shade and love, belting out banger after banger. Mindelle is a riot and her vocal prowess knows no bounds; she summons Dion’s range, vocal patterns and humor (where she sometimes gets the joke, and sometimes gets that she is the joke). Now that Beanie Feldstein has announced an early departure from the Funny Girl revival, maybe Mindelle can become the next Fanny Brice? But the show also seems to fall more in love with Jack and Rose than Dion, favoring a deep dive into extrapolating Titanic’s plot into riotous bachelorette party-level scenes of camp. Somewhere between Molly Brown removing an eggplant from her cleavage and a lip sync directly inspired by Rupaul’s Drag Race, you might start wondering where Celine has gone.

Still, like your favorite karaoke night (and it really did feel like one, especially when I saw Grande help himself to a drink from the bar while watching the action when offstage), the superbly talented cast goes full throttle on the songs, particularly Deitch on “All By Myself” and “Tell Him,” and Duncan, who channels Mommie Dearest-level energy in an elaborate scene that would do Everett Quinton and John Waters proud. Jaye Alexander also gets to strut his stuff in a few roles, including one that is best kept secret. As our central lovers, Ellis and Rousouli give great duet as well.

Does Blue direct Titanique into a frenzy? Sure. As the show speeds towards its most operatically tragic scenes, it becomes even more madcap, and the limitations of the budget show, though the design team of Iron Bloom Creative Production and Gabriel Hainer Evansohn and prop designer Eric Reynolds prove mightily resourceful.

All is worth it, however, by the time we arrive at “My Heart Will Go On.” In a week when Supreme Court rulings caused hearts to break by the million across the country, an evening like this could prove to be just the salve we need.