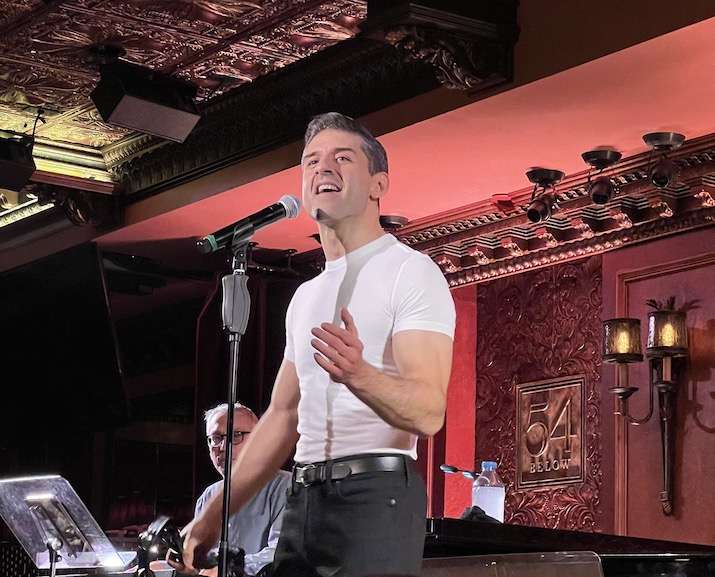 Truly. The gifted performer – New York’s only surefire triple threat showed a new side of himself at his most recent performance at Feinstein’s/54 Below. Always a cheerleader for live performance and for the classical works of stage, screen, and song, he’s now singing a different tune. One that’s about survival.

During this 80-minute show, Yazbeck speaks with a lot of self-reflection about recent difficulties he has overcome, including addiction, and parlays his new lease on life into an evening full of new takes on folk, pop, and rock songs – an evolution from the many standards that have populated his shows in the past. His “Recovery Suite” includes “The Last Man on Earth,” “Frail,” “Fade to Grey,” and “Into the Light.”  (Stalwart musical director and pianist Jerry Korman accompanied Yazbeck once more, and often provided some hilarious color commentary in response to Yazbeck’s material; Noah Chase backed him up on guitar and mandolin.)

With refreshing honesty, Yazbeck talked about how it feels to have overcome a difficult period and made amends to his loved ones, including his parents, and dedicated such songs as Stephen Sondheim’s “Not While I’m Around” and Leslie Bricusse and Anthony Newley’s “Pure Imagination” to his young son. Of course, Yazbeck did eventually tuck some more traditional songs into his lineup, including George and Ira Gershwin’s “I Can’t Be Bothered Now,” Lennon and McCartney’s “Blackbird,” Billy Joel’s “New York State of Mind,” and Joni Mitchell’s “Both Sides Now.” And of course, he put his prodigious tap skills on display as well.

But more than the singing and dancing, it was the confessional feel of the evening that made it one to savor. Yazbeck has charted a new course that includes grace and gratitude. His latest performance shows true evolution – a great step forward in the new year.

Gone In the Night