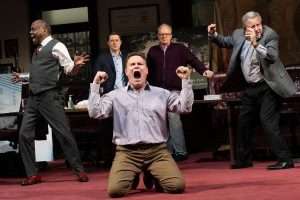 The Minutes doesn’t waste a single one of them

Slyly, slowly, The Minutes, ostensibly a play about the mundane power struggles within a group of city council members, reveals itself to be about something far more robust: a commentary on the past and our willingness to ignore or defy it, even when we claim to honor it.

Sound heady? It could be, but it’s not in the hands of director Anna D. Shapiro and actor-playwright Tracy Letts, who both know how to base any message in a riveting plot and fascinating characters and wed them to an appropriate style and setting. They have done this separately (Letts with Bug and Killer Joe, to name a few; Shapiro with The Motherfucker with the Hat) and together (the Pulitzer- and Tony-laden August: Osage County), and the winning combination hasn’t waned at all. Expect the unexpected, and be prepared for a real treat.

With names largely comprised of adjectives and verbs that stand out so they could have appeared in an advanced version of Clue, the councilmembers who have convened include Mr. Assalone (Jeff Still), who recoils every time someone forgets to pronounce the upward accent at the last syllable of his last name, but who largely resembles the first syllable; the perpetually distracted Ms. Matz (Sally Murphy); the uppity Ms. Innes (Blair Brown); Mr. Breeding (Cliff Chamberlain), reeking of privilege; Mr. Oldfield (Austin Pendleton), old and addled; and the domineering Mayor Superba (Letts himself).

There’s a newcomer to these proceedings, as well as to the fictional midwestern town of Red Cherry, Mr. Peel (Noah Reid). Though he’s been to a few of these meetings before, he missed the previous one due to a personal tragedy, and now that he’s back, he finds that his one ally at these meetings, Mr. Carp, is now missing. What happened? Why can’t anyone give him a straight answer?

Without being too overwrought, Shapiro and Letts create a sense of foreboding, a n ominous cloud that hangs over the play as Peel attempts to navigate why things seem so off. Apparently, Mr. Carp’s services have been terminated, something of which we are reminded every time the council clerk, Ms. Johnson (Jessie Mueller), calls his name, followed by a “My bad.” She, along with two other wild card members, Mr. Blake (K. Todd Freeman) and Mr. Hanratty (Danny McCarthy) might just be able to help him solve the matter.

What emerges is a story about racial appropriation and horror, circling around a seminal event in Red Cherry’s whose narrative is framed around the “Battle at Mackie Creek,” an 1872 rescue of a white girl by the Native Americans, who have since been labelled as savages. To help illustrate the event, the councilmembers break free from their seats to reenact the battle. The depiction is, perhaps, less than clarifying. (If you’ve been a fan of Letts’ writing career, you’ll know he has paid special attention to the alienation of indigenous people for a long time.)

Throughout, Letts pokes holes in the information we’re given in life without question, as well as the institutions that give them to us. Mr. Oldfield, trying to remember when he first learned about this famous battle, says, “Church, I think, or school. I can’t tell the difference.” The Minutes reminds us that facts are not carved in stone but molded in clay. Another breakaway scene involving Steppenwolf stalwart Ian Barford will force us to call into question everything we’ve taken at face value before.

It’s an explosive scene that on its own would have audience members singling Barford out if the entire ensemble wasn’t so uniformly excellent. Everyone in the cast gets a few moments – McCarthy’s proposal for a new fountain and Freeman’s discussion of something called the “Lincoln Smackdown” are also jewels. (I argue that Ms. Matz remains too histrionic.) Broadway newcomer Reid, of Schitt’s Creek fame, is apoplectic perfection as the audience surrogate, and Letts himself. His one-line declaration, “History is a verb!” is as haunting as anything you will find onstage all year. “Remember that you live in a cocoon of comfort and safety because a lot of people who came before you weren’t afraid to get their hands dirty.”

André Pluess’ sound design, wed to Brian MacDevitt’s lighting, pierce through the action at strategic points, accentuating the show’s edges as they begin to reveal just how sharp they are. Yes, The Minutes leaves us in a place much different from where we began, and many might argue that it takes a turn that’s perhaps unearned. I argue the opposite. The Minutes holds up a mirror and asks us to reckon with the doubleness of modern existence. How do we live versus how should we live? Whose stories matter and whose do not? Letts has provided us with the tools to answer these questions. But the choice remains ours to confront them.

Everything Everywhere All at Once