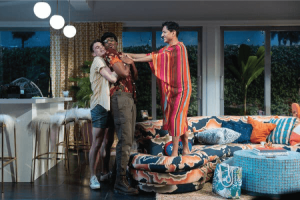 JC Lee’s “To My Girls” is boy bland

“Messy” is an adjective I’ve probably heard more in the last three or four years than I have for the entire earlier portion of my life – and rarely is it applied to custodial matters. Instead, it’s usually applied to juvenile decisions in adult relationships that sometimes lead to undesirable, if entirely foreseeable, consequences.

JC Lee’s new play, To My Girls, which just opened at the Second Stage Theater, is a messy play. The structure is messy, the characters behave in messy way; heck, they even cavort across he stage in messy ways. The result is a fun, if increasingly slim, glimpse at a weekend of frivolity in the lives of a group of gay male friends who convene at an Airbnb in Palm Springs. (Arnulfo Maldonado’s shabby-chic set design is on point.)

Three supposed BFFs (two others are supposed to join, but are waylaid through most of the show and not seen) plan to reboot their long friendship (they all met in New York, but two have since moved to Los Angeles) while they also film a music video they expect to go viral on social media – the group’s alpha, Curtis (Jay Armstrong Johnson), has abandoned his day job and is apparently flush with cash as an Instagram influencer.

Thrown into the mix are Castor (Maulik Pancholy), who seems to be nursing a lifelong crush on Curtis, and Leo (Britton Smith), an overly didactic social justice warrior who only stops sermonizing when Lee requires the character to become as shallow as his friends. Which begs the question…why are these men still friends? None of the three seem to have much in common, or even still appreciate the late thirtysomethings they have evolved into. They all seem to enjoy getting something over on each other than being their to provide encouragement or support.

As this sinks in while watching the show, efficiently directed by Stephen Brackett, one might think we’re in store for a major revelation that will finally destroy this toxic circle. And secrets do indeed start piling up and the shots keep pouring. But instead of building into a weekend-that-changed-everything sort of work, Girls ultimately plateaus into something lesser, something common and anticlimactic.

Don’t come to this show looking for much sociocultural commentary on the politics of gay friendship – but Lee does throw in some gratuitous politicking, aimed at the Boomer Bernie (a very good Bryan Batt), the gay man whose house is serving as the rental for the millennial men (he and his dog are apparently staying just up the street with…a friend? This detail is unclear). Bernie emerges as not just a Republican but a Trumper, a revelation that makes no sense and yields little fruit, as it provides the audience without a single surrogate to side with. Bernie is the one who actually has the most life experience and truths to offer (“You know you don’t have to stay friends with people once they turn into someone you don’t like”), but just when he points out the immaturity and hypocrisy of his tenants, the play neuters them. Lee ensures that Bernie has lost the audience, leaving no one to root for.

It certainly remains unclear whether we should like or dislike Curtis, who Armstrong very convincingly plays as an attractive, confident man who can’t help but give into his id. But is he more self-aware or solipsistic? “You’re a handsome white guy with a good job and I’m, like, an Asian writer who works at Starbucks to pay the bills,” Castor tells him, but Castor has carried a torch for him for years, which Curtis is aware of and has used to feed his own ego. It becomes even more challenging to like Curtis when he eventually makes a move on Omar (Noah J. Ricketts), the attractive Gen Z mark Castor has brought home from a club.

Leo acquits himself better (and Smith nails Lee’s zinger-ific dialogue) with his takedowns of Curtis, and through that character Lee is able to inject some alternative perspectives of the competitive gay scene – until this character, too, is undercut by his own apparent crush on Curtis.

So what are we take make of Girls? Do we come to praise Curtis, or to bury him? In an unexpected twist, Girls actually provides a funeral – but definitely not for Curtis. His verdict ends in a hung jury.