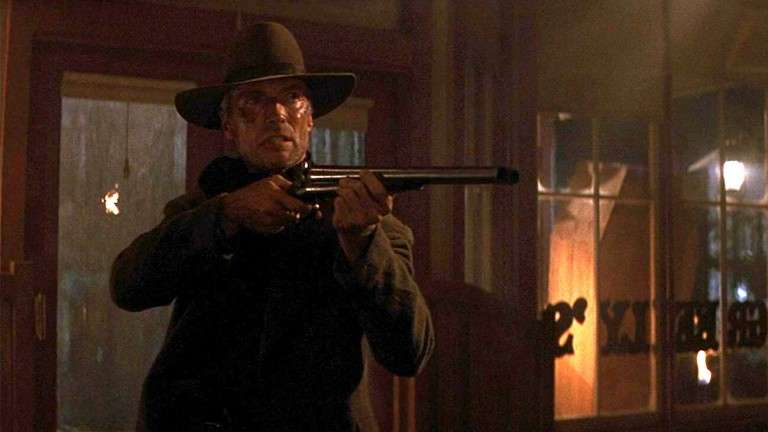 Thirty years ago today, Clint Eastwood’s Unforgiven was released, proving to be a powder keg during the doldrums of summer. It opened at number one and went on to gross nearly $160 million, more than ten times its budget, and went on to win four Academy Awards, including Best Picture and Best Director for Clint Eastwood, immediately and irrevocably altering his legacy from iconic Western star to one of the most acclaimed and beloved filmmakers of the century.

Unforgiven’s Oscar win is even more curious in that it was only the third, and almost 100 years into the Academy Awards, final, Western to win the coveted award. Only Cimarron had nabbed Best Picture in the 1930s, despite a proliferation of seminal Westerns released in the Golden Age of Hollywood. And while Dances With Wolves became the second Western to be named Best Picture only two years prior, Unforgiven is a different animal altogether.

Working off of David Webb Peoples’ powerful, bleak script – one that had hovered around Hollywood since the 1970s – Eastwood’s film is a revisionist Western. It seeks to reject and demystify the mythology of the lone gunslinger. His character, Will Munny, is a man with a past. He’s an alcoholic who has sworn off the sauce and his killed men, women and children for decades before settling down (he’s widowed with two young children when we meet him at the start of the film). When asked to avenge the slashing of a prostitute in Big Whiskey, Wyoming, he grudgingly accepts, and only because he needs to money to support his family. (Life as a rancher isn’t cutting it).

But it isn’t so easy getting back in the saddle – literally. Where an earlier Western would have had Will hop right on his horse and gallop away, Will finds great difficulty mounting his horse, embarrassingly falling to the ground multiple times. And the trip to Big Whiskey is stripped of all glamor. Munny finds sleep uncomfortable to the point of impossibility, later having to spend all night in the rain, and ultimately getting sick as a result

Separately, Unforgiven tears apart the macho image of the Midwest. Saul Rubinek’s naïve journalist, W.W. Beauchamp, has the wool ripped from his eyes when murderous sheriff, “Little” Bill Daggett (Gene Hackman, who also rightly won a second Oscar for his work here), defangs and then brutalizes supposed legend English Bob (Richard Harris). For the first time, he sees the dark side of the violence he has glorified from afar. Men who claim to be accomplished murderers prove to be cowards. Munny’s partners, Ned Logan (Morgan Freeman) and the Schofield Kid (Jaimz Woolvett) both reach a point when they can no longer continue to commit the acts of killing they’ve signed up for. “It’s a hell of a thing, killing a man,” Munny philosophizes. “Take away all he’s got and all he’s ever gonna have.”

Unforgiven questions, without moralizing, who the traditional bad guys and good guys are. The prostitutes are troubled and maligned, but they are also tough and supportive, abiding by their own code to help one another get by. And Munny, like Achilles of mythology, thinks he has turned a corner on his violent past, until he finds he has no choice but to kill again. When their best friends are killed – for Achilles, it’s Patroklos; for Munny, it’s Ned – they abandon any gray area as to whether their targets have a violent end coming. It’s fact, and it’s fate.

Here’s another fact: in many ways, Unforgiven killed the western – but it revived Eastwood’s career.

The Problem with the “Bros” Problem