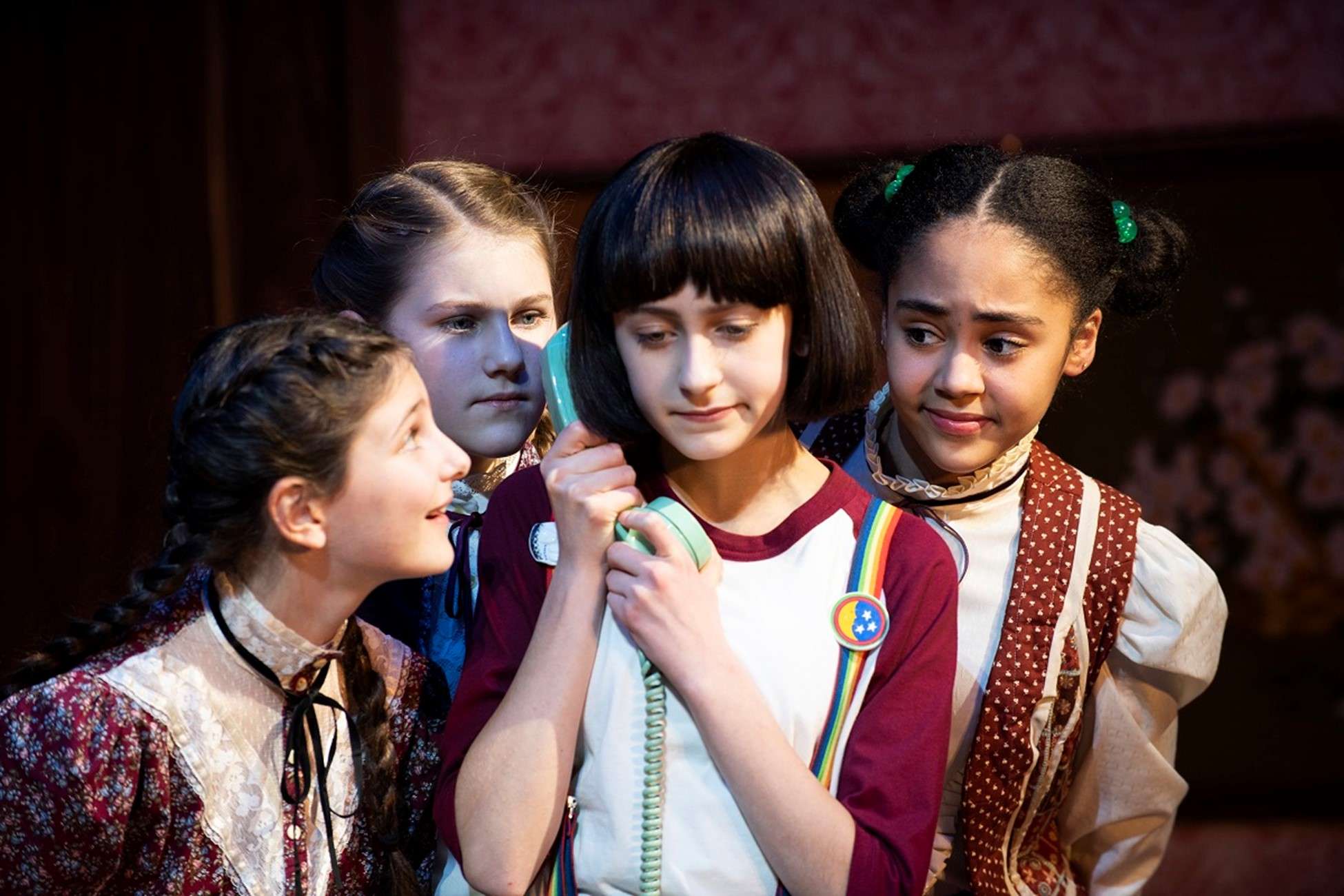 Throughout Sarah Silverman’s career, going on nearly three decades, the famously ribald comedian has held very little back. Such was the case with her 2010 memoir The Bedwetter, a collage of accounts from her entire life to that point. The new musical version of Bedwetter, now running at the Atlantic Theatre Company’s Linda Gross Theatre, takes a capsule from its literary source, focusing on one eventful year in Silverman’s life. It’s one thing to talk abut a piece or a moment in someone’s life to give us a peek at the entire picture. (Think All the Way or The Queen). In dwelling solely on Silverman’s pre-teen incontinence, though, Bedwetter, gives us an incomplete story.

We catch Sarah in 1981 when she’s ten years old (and played by Zoe Glick in a performance that succeeds in summonsing her subject far more than imitating her) and newly arrived in Bedford, New Hampshire. A product of divorce, she’s learned blue humor and bluntness from her father, Donald (Darren Goldstein), an oversexed local mini-celebrity who runs a clothing outlet store, and pop cultural awareness from her mother Beth Ann (Caissie Levy), self-bedridden following a devastating loss in the family.

Though she has an older sister, Laura (Emily Zimmerman, very good), Sarah’s very much an island – and outwardly, she has learned to cope. She’s able to win over some new friends at school (winningly played by Charlotte Elizabeth Curtis, Charlotte MacLeod, Margot Weintraub), but she also harbors a fear that they will discover her one secret: she wets the bed at night. One night, she tentatively sleeps over with her new friends, and only a national tragedy prevents her personal shame from being discovered.

The bedwetting is a real circumstance, but it’s also not the real problem, and the show stumbles when trying to chart its true course. The Silvermans are all reeling from a major loss, and the way playwright Joshua Harmon’s (Admissions, Prayer for the French Republic) book clunkily veers from toilet humor to melodrama and back creates major tonal issues. It also fails to replicate Silverman’s irreverence as a public figure. We watch ten-year-old Sarah and cringe, a little, at her potential embarrassment, but also with the assurance that these problems will go away because we’ve seen the adult version, who seems to be doing just fine.

But the show doesn’t suggest how the path is to be navigated. Even though Bedwetter omits the rest of Silverman’s stories from her life, what remains in the musical still feels like a bit of a patchwork, vignettes stitched together from her fifth-grade year because there are items that need to be checked off. Mother’s depression? Check. Grandma’s drinking? Check? Fart jokes? Check. Jewish self-deprecation? Check. Acknowledgement of Silverman’s early Xanax prescription? Check, and without acknowledging the full toll that took on her during her teen years. There certainly shouldn’t be shame in incontinence but that’s a symptom stemming from a larger place of pain — merely namedropping her depression is a starting point, yet but that’s where the show gives up.

In addition to mishandling the mental health component, Harmon’s book is structurally inelegant in other ways. Sarah’s grandmother, Nana (Bebe Neuwirth), doesn’t really ring true – the character is overused as an expository device and her alcoholism is both heavy-handed and too frequently deployed as a punchline. (Harmon shoehorns in a meta reference to Neuwirth’s work on Cheers by having Beth Ann discuss the show – but this would be an error, because the show is set one year before the comedy series debuted on television.) And while Bedwetter first gently doles out information about the Silverman family, it quickly grows clumsy, throwing it all out once.

The show’s music is also thematically discordant, even if tonally it’s catchy and audience-pleasing. Sadly, composer-lyricist Adam Schlesinger, who married sophisticated songwriting with contemporary quirk and juvenile humor time and time again in Crazy Ex-Girlfriend, and also scored Cry-Baby, passed away from COVID-19 in the early days of the pandemic; this show is one of the last testaments to his talent. Bedwetter recruited musical comedy maestro David Yazbek as a consultant, and it’s not clear whether he made original contributions to the score or merely tried to refine them. Either way, the score feels underrealized (the rhymes, in particular, are predictable) and not quite of a piece, failing to provide additional character insight or advance plot. They are also written in a key that forces the younger performers to sing higher than their natural voices let them. The best ones are the more comedic ones – like “In My Line of Work” – belonging to Goldstein, who nearly runs away with the show.

In fact, the funnier, secondary elements of the show tend to be the more inspired ones, which makes sense, given the seasoned supporting cast. Whether he’s playing Sarah’s doctor or imitating Johnny Carson, Rick Crom is a one-man comedy tour-de-force. Ellyn Marie Marsh and Ashley Blanchet are similarly hilarious as Sarah’s beleaguered elementary school teacher and Miss New Hampshire, who also serves as a reassuring figment in Sarah’s imagination, respectively; the two also appear in some fake local public access commercials for her father’s outlet store.

In some ways, Bedwetter shares some DNA with the Atlantic’s earlier success story this season, Kimberly Akimbo: both were about school-age children whose peers and families didn’t understand them. But the latter show had a vivid feel and visual style. Anne Kaufman has directed Bedwetter sluggishly and with an aloofness from the Silvermans that runs counter to its zippy script. Laura Jellinek’s sets feel interchangeable, with a dourness permeating every setting, whether it’s a parent’s house, a schoolmate’s home, a doctor’s office, or a school, when there should be a contrast between what Sarah experiences from one setting to another. Additionally, there are constant sightlines to the wings – audiences can see offstage actors getting ready to make another entrance, which is distracting. (All of which made me long for a return to A Life, the theatrical miracle they worked on together not so long ago.)

What I wish Bedwetter showed more of? The real Sarah Silverman. Though given an unfair burden, Glick does what the show cannot: replicate Silverman’s voice and really see the truculent comedienne come through. This show is a little too pat, too boxed-in, too desperate to be liked and too afraid to be messy. Like her or not (though if you don’t like her, why come to the show?), Silverman never met an edge she didn’t want to go over. Bedwetter, afraid of making a mess, builds itself a square and then decides to fill it to the corners when it should have let its naughty heart and soul bleed far past the borders.