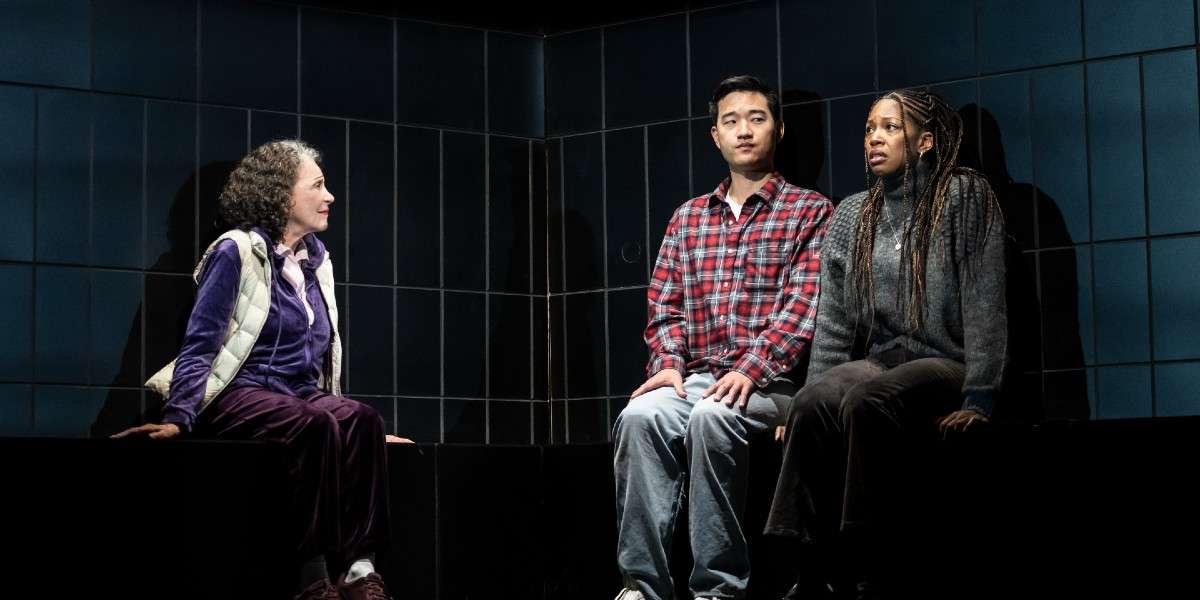 There are many ways in which Noah Diaz’s sometimes dizzying, sometimes fizzy new play, You Will Get Sick, which just opened last night at Roundabouts Laura Pels Theatre, seems to take place in a world distant from our current one. For starters, there do not seem to be any cellphones, of the smart or dumb variety. Secondly, $20 still seems to go a long way, even in New York City.

And then there is the way the characters regard the concept of illness. Between social media oversharing, and, well, the COVID of it all, we’re all steeped in a constant conversation about diagnoses and symptoms, of treatments and cures. Not so much for the protagonist of Noah Diaz’s new play, however: the man, identified as #1 (and played with endearing warm and both emotional and physical dexterity by Daniel K. Isaac), cannot bring himself to disclose the fact that he is sick. He knows of grief, having been stricken by it, only to now learn he might be on the causal side.

After posting a series of fliers around Manhattan, #2 (Linda Lavin) responds to his request. She’s actually an actress, according to her own self-description, named Callan, and she’s immediately recognizable as the kind of scrappy hustler whose so flinty that she gets in her own way as often as she eases it. Their transactional relationship begins in a barbed fashion; she doesn’t understand that he merely wants to pay her to say things he can’t bring himself to, he wavers on exactly how much he can pay and then flakes out on signing a check. But it eventually blossoms into a deeper connection, as she becomes more of a de facto caregiver, and his payments fill a need that Callan herself remains coy about.

Not quite absurd, and too earthbound in some ways to be truly surreal, Diaz has instead created a fantasia that lightly treads the same path of Christopher Durang and Sarah Ruhl (who was, in fact, one of the playwright’s instructors at Yale, where he developed You Will Get Sick in those now seemingly long-ago pre-pandemic days). Diaz has calibrated an ethereal way to portray disease, but isn’t afraid of coming back down to earth for a cutting bon mot. When Callan tells #1 about her desire to audition for the role of Dorothy Gale, he responds with “Did this Dorothy see the trials of war and age 60 years?”

To the credit of both Diaz’s play and Sam Pinkleton’s well-paced, humane direction, this reciprocal approach to the discussion of sickness never feels aloof nor clinical (#1’s disease remains ambiguous and unnamed throughout) – perhaps in part because of Pinkleton’s background as a choreographer, including a 2017 Tony nomination for Natasha, Pierre & the Great Comet of 1812. He knows how to keep the work kinetic; it’s invigorating but also knows when to slow down and let its characters breathe.

You Will Get Sick also pivots in jagged ways, integrating two ensemble players – listed as #3 and #4, and played by Marinda Anderson and Nate Miller – in a variety of roles, some funnier than others, and utilizing an additional player, #5 (Dario Ladani Sanchez), largely as a narrator for the changes experienced by #1. The action goes a little haywire during the show’s midsection, with Diaz putting his ensemble through paces that don’t accumulate into something greater (we’re better off in #1’s deteriorating world than we are in #2’s acting classes).

But in the relatively short play’s (it runs a little under 90 minutes) last act, it does achieve higher ground. A great deal of the show’s fun comes from the ways Pinkleton’s creative team dramatizes the disease’s progression. Tricky, convincing set design from the collective known as dots, special effects by Skylar Fox, costume design by Michael Krass and Alicia Austin, lighting from Cho See, and sound design by Lee Kinney all contribute to Diaz’s larger metaphor about confronting the ravages of illness. Composer Daniel Kluger, who helped reconceived the recent Oklahoma! revival, also provides subtly spooky organ music.)

You Will Get Sick
Laura Pels Theatre
https://www.roundabouttheatre.org/get-tickets/2022-2023-season/you-will-get-sick/

Under the Dragon’s Tail: A Review